An FBI ‘Most Wanted Terrorist’ poster for Palestinian terrorist Ahlam Ahmad al-Tamimi, one of the perpetrators of the August 2001 bombing of the Sbarro pizzeria in Jerusalem. Photo: FBI.

August 9, 2022, marked 21 years since the attack on the Sbarro pizza restaurant in Jerusalem. Fifteen people were murdered, including five members of one family, and 130 people were injured.

As a reward for carrying out the attack, the Palestinian Authority (PA) pays a total of $8,937 (27,800 shekels) each month to the five imprisoned terrorists and the families of the three dead terrorists who were involved in the attack. 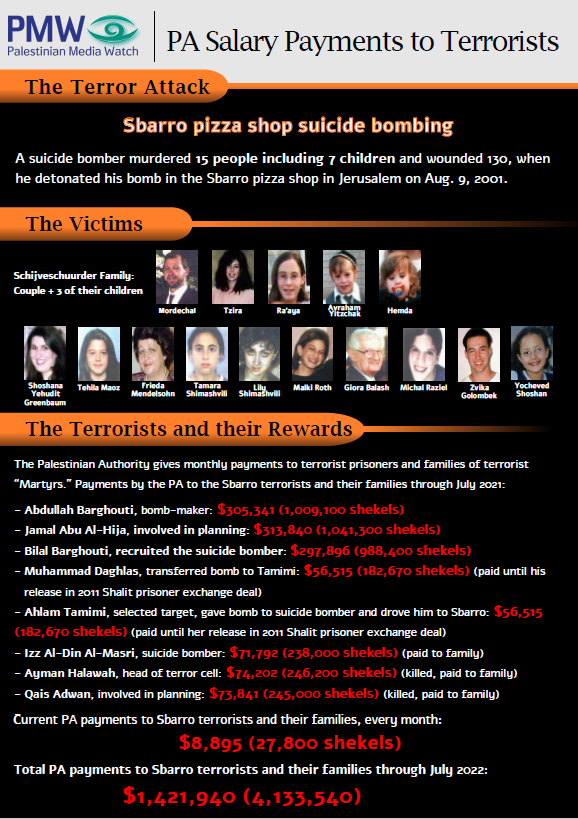 Every month the PA pays the family of the terrorist suicide bomber Izz Al-Din Al-Masri 1,400 shekels ($450) per month.

Every month the PA pays the family of the dead terrorist Qeis Adwan 1,400 shekels ($450) per month.

Every month the PA pays the family of the dead terrorist Ayman Halawah 1,400 shekels ($450) per month.

Every month the PA pays a certain amount to the terrorists Muhammad Daghlas and Ahlam Tamimi. While they were arrested and convicted for their part in the attack, these two terrorists were released in 2011, as part of the deal to secure the freedom of IDF soldier Gilad Shalit, who had been held captive by Hamas.