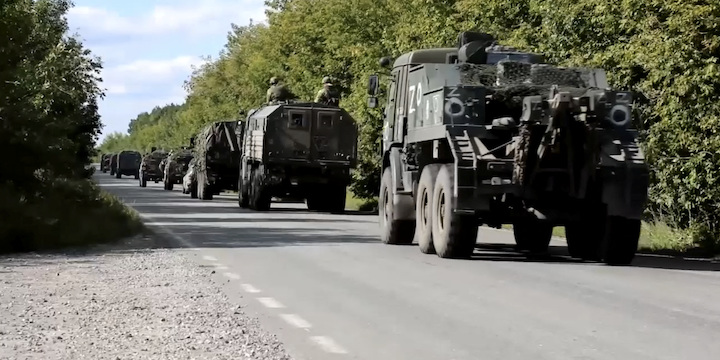 A still image from video, released by the Russian Defense Ministry, shows what it said to be a Russian military convoy heading towards the frontline in Ukraine’s Kharkiv region, at an unidentified location in the course of Russia-Ukraine conflict, in this still image taken from a handout video released September 9, 2022. Photo: Russian Defense Ministry/Handout via REUTERS

KYIV/HRAKOVE, Ukraine (Reuters) -Ukrainian officials shared photos on Saturday showing troops raising the nation’s flag over the main railway city that has supplied Russian forces in northeastern Ukraine, as a collapse in Russia’s frontline threatened to turn into a rout.

A Reuters journalist inside a vast area recaptured in recent days by the advancing Ukrainian forces saw Ukrainian police patrolling towns and boxes of ammunition lying in heaps at positions abandoned by fleeing Russian soldiers.

With Ukrainians now having reached the city of Kupiansk, where rail lines linking Russia to eastern Ukraine converge, the advance had penetrated all the way to Moscow’s main logistics route, potentially trapping thousands of Russian troops.

Natalia Popova, adviser to the head of the Kharkiv regional council, shared photos on Facebook of troops holding up a Ukrainian flag in front of Kupiansk city hall. A Russian flag lay at their feet. “Kupiansk is Ukraine. Glory to the armed forces of Ukraine,” she wrote.

In Hrakove, one of dozens of recaptured villages, Reuters saw burnt out vehicles bearing the “Z” symbol of Russia’s invasion, and piles of rubbish and ammunition in positions the Russians had abandoned in evident haste.

“Hello everyone, we are from Russia,” was spraypainted on a wall.

Three bodies lay in white body bags in a yard.

The regional chief of police, Volodymyr Tymoshenko, said Ukrainian police had moved in the previous day, and had checked the identities of local residents who had lived under Russian occupation since the invasion’s second day.

“The first function is to provide help that they need. The next job is to document the crimes committed by Russian invaders on the territories which they temporarily occupied.”

The capture of at least part of Kupiansk, if confirmed, potentially leaves thousands of Russian soldiers trapped at the frontline and cut off from supplies, including in Izium, Russia’s main stronghold and logistics hub in the northeast.

Reuters could not independently verify the situation in either Kupiansk or Izium. Moscow has acknowledged that its frontline has buckled in Kharkiv but has said it is rushing extra troops to reinforce the area. Russian-installed regional officials have called for civilians to evacuate both cities.

Britain’s Ministry of Defense in an intelligence update said: “A Russian force around Izium is likely increasingly isolated.

“Ukrainian units are now threatening the town of Kupiansk; its capture would be a significant blow to Russia because it sits on supply routes to the Donbas front line.”

Mark Hertling, a retired four-star general and former commander of US ground forces in Europe, tweeted: “Make no mistake, (Ukraine) is executing a brilliant maneuver focused on terrain objectives to ‘bag’ Russians. But the Russians are helping them — by doing very little to counter.”

In an overnight video address, President Volodymyr Zelensky said at least 30 settlements had been liberated in Kharkiv region during the advance of recent days.

“Our army, intelligence units and the security services are carrying out active engagements in several operational areas. They are doing so successfully,” he said in a video address.

Ukrainian officials have released a barrage of images of troops sweeping into previously Russian-held towns and being embraced by local residents who had been under Russian military occupation for six months.

Oleksiy Arestovych, an adviser to Ukraine‘s presidential office, in a video posted on YouTube, said the Russians in Izium were almost isolated.

Ukraine‘s advance in the east is by far its most rapid success in months, after a long period in which the war had shifted into a relentless grind along entrenched front lines.

It came as a surprise just a week after Kyiv announced the start of a long-awaited counter-attack to reclaim Russian-occupied territory hundreds of kilometers away at the opposite end of the front in Kherson in the south.

Less information has been made public about that operation but Kyiv has also claimed some successes there, cutting supply routes to thousands of Russian troops isolated on the west bank of the Dnipro River.

“We see success in Kherson now, we see some success in Kharkiv and so that is very, very encouraging,” US Defense Secretary Lloyd Austin told a news conference in Prague on Thursday.

Tens of thousands of people have been killed, millions have been driven from their homes and Russian forces have destroyed entire cities since launching what Moscow calls a “special military operation” to “disarm” Ukraine. Russia denies intentionally targeting civilians.