In Physics Test, Palestinian Students Asked to Calculate the Distance a Terrorist Murderer Traveled to Commit His Next Attack Because of his attacks, Al-Tamimi has already been featured in a question on a physics test in a Palestinian school.

Students were asked to calculate “the path of the Martyr” from his home to his last attack: 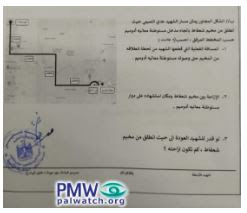 A picture was published on social media of a physics test for students at one of Palestine’s schools, which includes a question on the operation [i.e., terror attack] carried out by Martyr Uday Al-Tamimi in Jerusalem…

The article includes a picture of the physics test question, which reads:

“B. The adjacent diagram presents the path of Martyr Uday Al-Tamimi, who set out from the Shuafat refugee camp towards the entrance to the settlement Ma’ale Adumim according to the attached drawing. Calculate:

1. The actual distance that the Martyr travelled from the moment he left the refugee camp until he reached the settlement Ma’ale Adumim.

2. The relative position between the Shuafat refugee camp and the site of his death as a Martyr at the square of the settlement Ma’ale Adumim.

3. If the Martyr could have returned to the point from which he set out in the Shuafat refugee camp, what would his relative position be?

This is an illustrative example of how Palestinian youth are taught that terrorist murderers are heroes — a Palestinian Authority policy, as Palestinian Media Watch has exposed for decades.

In this matter-of-fact way, through an “innocent” question in a test, the terrorist “Martyr’s” attacks were glorified — and children were taught that killing innocent Jews was something to be praised and lauded for.