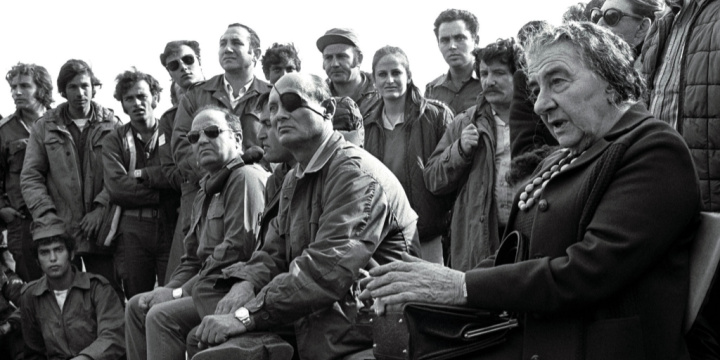 Former Israeli Prime Minister Golda Meir (R) accompanied by her Defense Minister Moshe Dayan, meets with Israeli soldiers at a base on the Golan Heights after intense fighting during the 1973 Yom Kippur War. Photo: Reuters

Israel’s late prime minister Golda Meir has been honored in the Ukrainian capital Kyiv — the city of her birth — with a street named after her, a move voted for by a majority of residents in the district where it is located.

In a statement on Friday, the Kyiv city council confirmed that the formerly-named Krasnodar Street had been renamed for Meir, Israel’s first and only woman prime minister, who was born in the city in 1898 when it was part of the Russian Empire. Meir and her family fled from antisemitic pogroms five years later, eventually settling in Milwaukee, WI., in 1906.

The council pointed out that it was seeking to “decolonize” street names and other public places in Kyiv from Russian influence. The street being renamed for Meir was previously known as Krasnodar Street, after the Russian city of the same name. More than 150 streets have been given alternative names since May.

Kyiv residents were permitted to vote for their preferred names through an electronic voting system. According to the council’s statement, “among the options for renaming, GoldaMeir Street received the largest number of votes, namely 7,252 votes. The new name is proposed in honor of the native of Kyiv, Israeli statesman, one of the founders of the state of Israel, the 4th Prime Minister of Israel, Golda Meir.”

Kyiv’s deputy mayor, Petro Olenych, said on Monday that residents of the capital had until Nov. 13 to submit their votes on the renaming of streets and squares.

In August, Kyiv’s Mayor, heavyweight boxing champion Vitalii Klitschko, announced plans to rename a street in Meir’s honor. Klitschko made the announcement following a meeting with the Israeli Ambassador to Ukraine, Michael Brodsky.