The latest trend in the Palestinian Authority (PA) is a new kind of jewelry: Necklace-amulets with pictures of terrorist “Martyrs” on them.

Hisham, a store owner in Nablus who makes these necklaces, chose specific terrorists who are the most popular. All of them have carried out shooting attacks, and some of them were members of the terror cell The Lion’s Den. 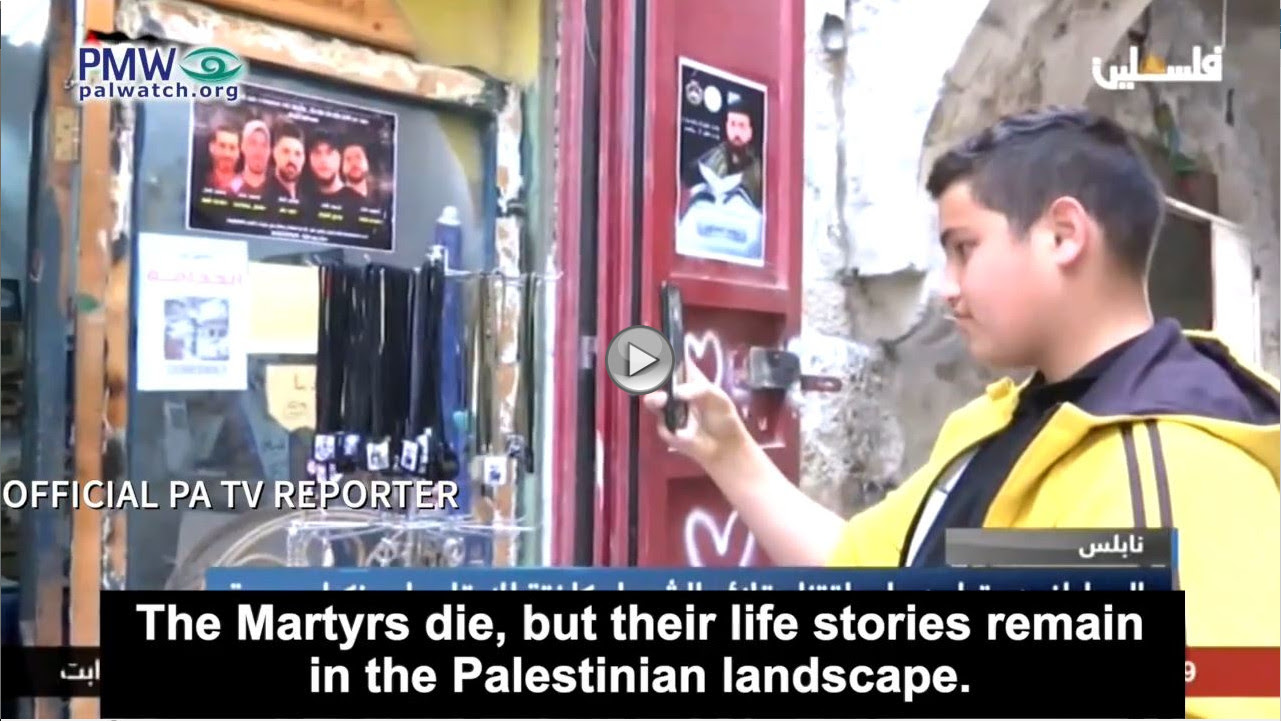 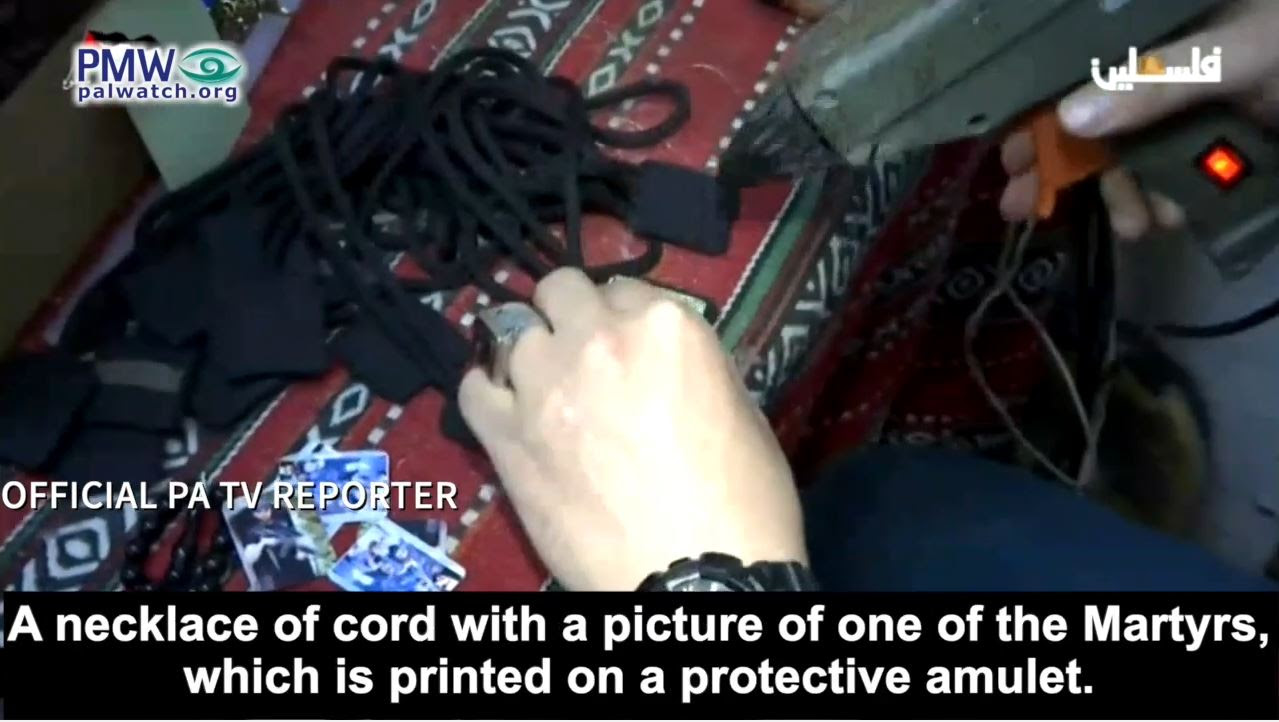 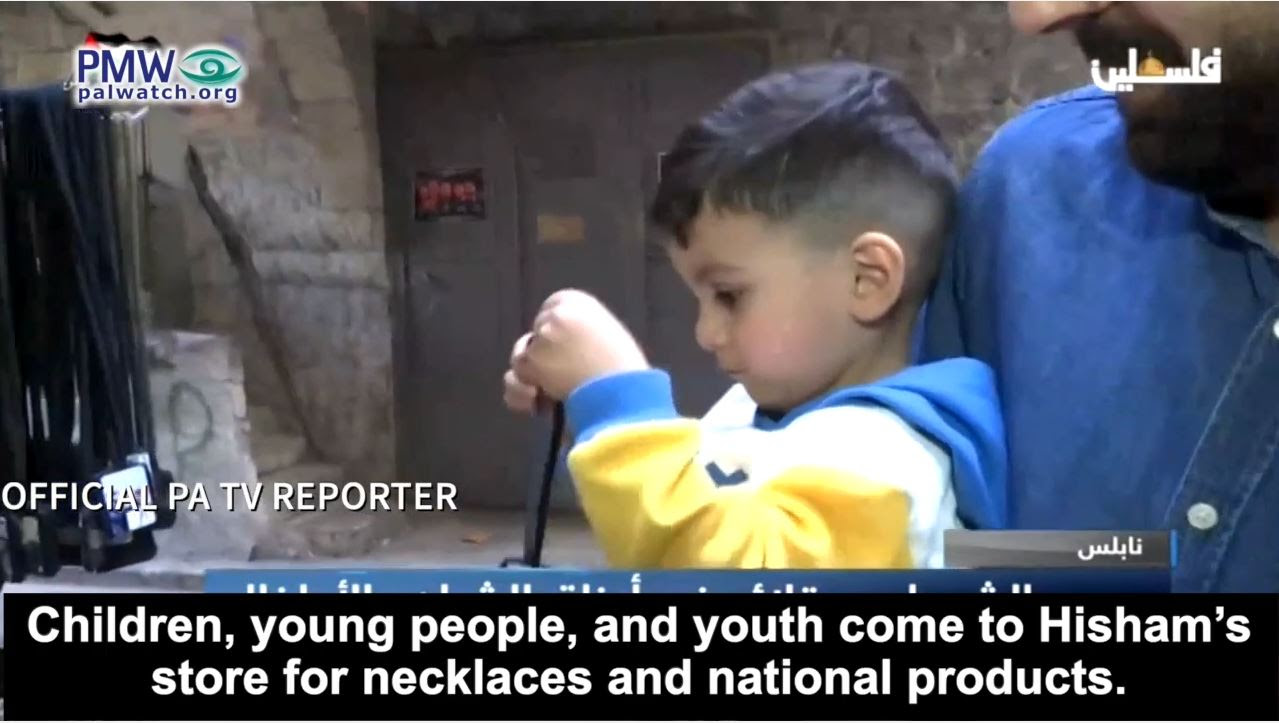 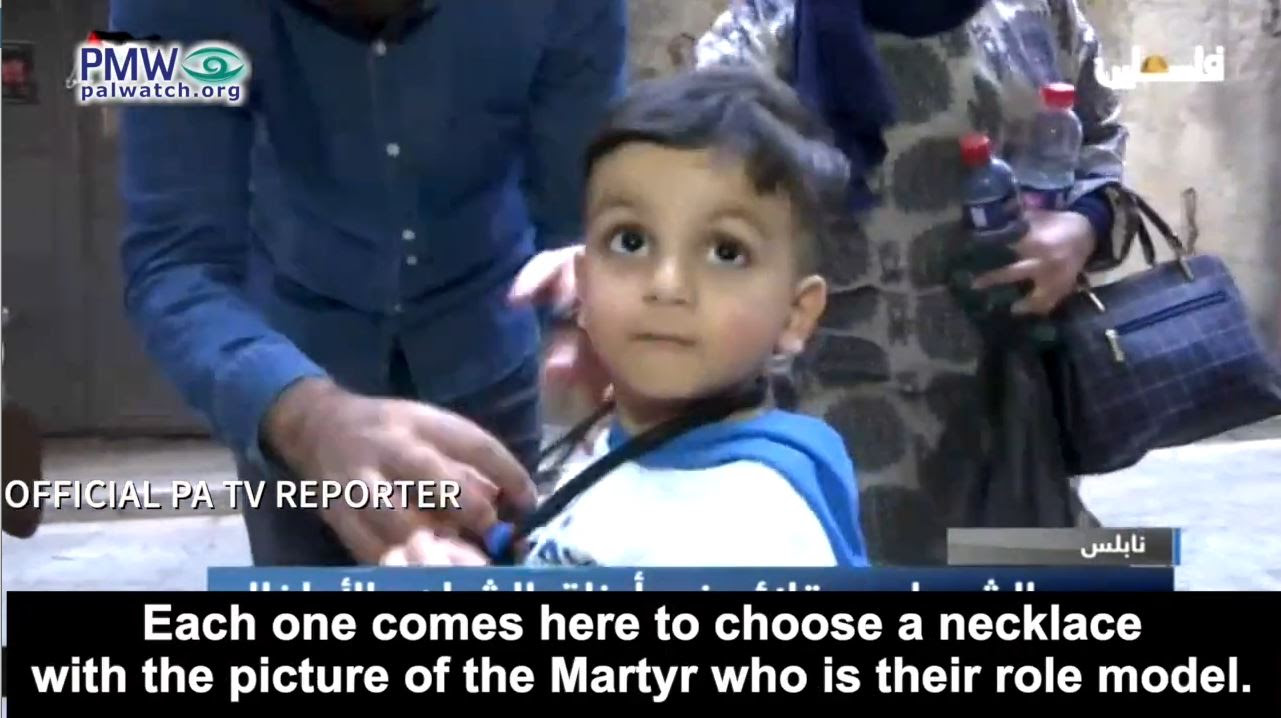 Official PA TV reporter: “The Martyrs die, but their life stories remain in the Palestinian landscape. In the heart of the old city of Nablus, Hisham strives to create necklaces of Martyrs. A necklace of cord with a picture of one of the Martyrs, which is printed on a protective amulet. The Martyrs themselves customarily wear it from time to time…”

Storeowner Hisham: “Every [Martyr] has his own status, but Muhammad Al-Azizi, Abboud [Abd Al-Rahman] Sobeh [i.e., terrorists, shot at Israeli soldiers], Ibrahim Al-Nabulsi [terrorist responsible for numerous shooting attacks], Wadi’ Al-Houh [terrorist who shot at Israeli soldiers], and Tamer Al-Kilani [terrorist responsible for numerous shooting attacks] — you could say that there is a special demand for them.”

Reporter: “Children, young people, and youth come to Hisham’s store for necklaces and national products. Each one comes here to choose a necklace with the picture of the Martyrs who are their role models.”

Palestinian Media Watch (PMW) has exposed the PA’s all-encompassing idolization of terrorists in general, and terrorist “Martyrs” in particular.

From among the terrorists named as particularly popular by the store owner in Nablus, PMW has reported extensively on the glorification of Ibrahim Al-Nabulsi, who was a member of the Al-Aqsa Martyrs’ Brigades (Fatah’s military wing), and was responsible for a series of shooting attacks. PMW also reported on an event held by Nablus marking 40 days since the deaths of terrorists Sobeh and Al-Azizi. At the event, a Fatah official “emphasize[d] the unity of the blood and the Martyrs, and that the path of our Palestinian people is resistance.”

All the “Martyrs” mentioned by the storeowner were terrorists, per the below.

Ibrahim Al-Nabulsi — Palestinian terrorist and member of the Al-Aqsa Martyrs’ Brigades (Fatah’s military wing), who was responsible for a series of shooting attacks targeting Israeli soldiers. Al-Nabulsi resisted arrest and shot at Israeli soldiers, who returned fire and killed him in Nablus on Aug. 9, 2022. Al-Nabulsi was a member of a Fatah terror cell that was attacked while planning an imminent attack on Feb. 8, 2022. Al-Nabulsi escaped at the time, but three other members of the cell were shot and killed: Adham Mabrouka Al-Shishani, Muhammad Al-Dakhil, and Ashraf Mubaslat.

Wadi’ Al-Houh, Ali Antar, Hamdi Qayyim, Mash’al Baghdadi, Hamdi Sharaf — Palestinian terrorists and members of the independent terror cell “The Lion’s Den,” who shot at Israeli soldiers raiding and destroying a headquarters and weapons/explosives laboratory of the cell in Nablus on Oct. 25, 2022. Israeli soldiers returned fire in self-defense, killing the 5 terrorists. During the raid, PA Security Forces shot at the Israeli soldiers, who returned fire in self-defense and wounded several of them. Al-Houh was a senior member of “The Lion’s Den.”

Tamer Al-Kilani — 33-year-old Palestinian terrorist and senior member of “The Lion’s Den” who was responsible for numerous shooting attacks, including an attempted shooting and explosives attack by terrorist Muhammad Al-Minawi in Tel Aviv that was thwarted by Israeli security forces on Sept. 8, 2022. Al-Kilani was assassinated in a targeted bombing in Nablus on Oct. 23, 2022.