A police motorcycle burns during a protest over the death of Mahsa Amini, a woman who died after being arrested by the Islamic republic’s “morality police”, in Tehran, Iran September 19, 2022. WANA (West Asia News Agency) via REUTERS

During a recent press conference, the Iranian Attorney General, Mohammad Jafar Montazeri, was questioned about the status of the Iranian morality police (officially named the “Guidance Patrol”).

The morality police are a unit tasked with enforcing the Islamic Regime’s strict dress code in public. This dress code includes the mandatory wearing of the hijab (traditional head covering) by adult women, and a prohibition against wearing tight-fitting clothing.

In September 2022, the morality police arrested 22-year-old Mahsa Amini, claiming that she was dressed inappropriately.

Three days after her arrest, Amini died in custody, sparking an unprecedented wave of nationwide protests against the Islamic Regime that continue to this day.

Since the protests began, the morality police have had a reduced presence on the streets of Iran.

In response to the question about the status of the morality police, the Attorney General gave a seemingly vague and convoluted statement, saying: “The morality police had nothing to do with the judiciary and have been shut down from where they were set up.” 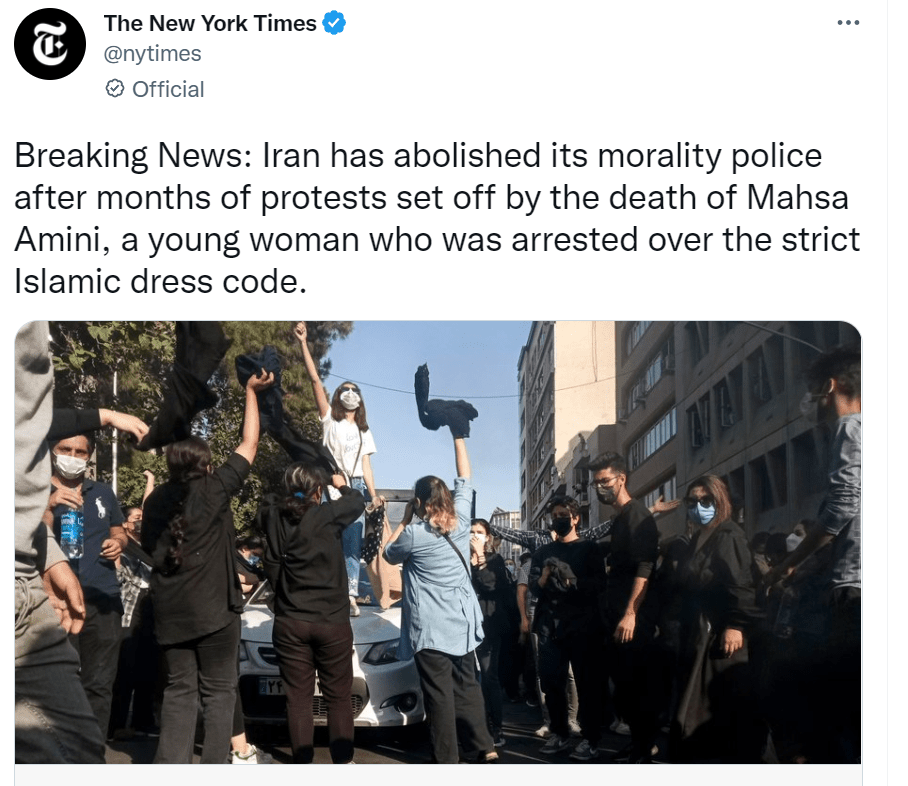 However, analysts and activists familiar with the region were quick to question the validity of these reports.

Some (see here and here) claimed that the Attorney General’s statement was propaganda put forward by Tehran in order to calm the continuing anti-regime protests within Iran.

Activist Masih Alinejad opined that this state-sanctioned misinformation campaign was similar to an Iranian statement from 2017 that was widely published in the international media, when the Islamic Regime claimed that it was halting arrests for violation of the dress code — a claim that has been refuted by the case of Mahsa Amini and many others.

Other regional analysts (see here and here) pointed to the fact that the Attorney General is not responsible for the morality police (it falls under the jurisdiction of the Interior Ministry), and that his statement was vague and convoluted.

These analysts questioned why so many mainstream media organizations were quick to publicize that the morality police were disbanded, when this claim was not an official statement nor a straightforward answer to the question.

In the hours following the Attorney General’s statement and the subsequent denial of its veracity by Iranian officials, the media have begun to qualify their reports, stating that the fate of the morality police is “unclear” or there is “uncertainty” over the official’s remarks.

Ultimately, why does it matter that the media published inaccurate pieces with sensationalist headlines about the morality police only to later revise them?

The initial slew of news pieces claiming that the morality police had been disbanded is concerning for two reasons: First, if the Attorney General’s statement was a piece of Iranian propaganda meant to curb protests within the country, why did the media publish this state propaganda without any qualifications or critical analysis?

Second, if the Attorney General’s statement was an unofficial claim that was poorly worded, why did the media not do its due diligence in confirming the substance of his claim? Since the morality police falls under the purview of the Interior Ministry, it would have behooved the media to verify the Attorney General’s claims with a ministry representative before uncritically publishing them.

Because the Iranian attorney general’s statement was delivered amid ongoing civil unrest in the Islamic Regime, the media has a responsibility to report credibly on these matters and to avoid publishing unverified rumors or stories.

Furthermore, in an age where it has been proven that the Islamic Regime has lied about its nuclear ambitions (see here and here), and has also been promoting disinformation campaigns in order to fan the flames of tension between Israelis and Palestinians, journalists must exercise caution and perform their due diligence before publishing unverified claims that emerge from Tehran.

With the speed at which distortions and falsehoods can be spread around the globe, journalistic due diligence is a necessity that cannot be overlooked.