The Palestinian Authority’s Incitement to Terror and Murder Continues 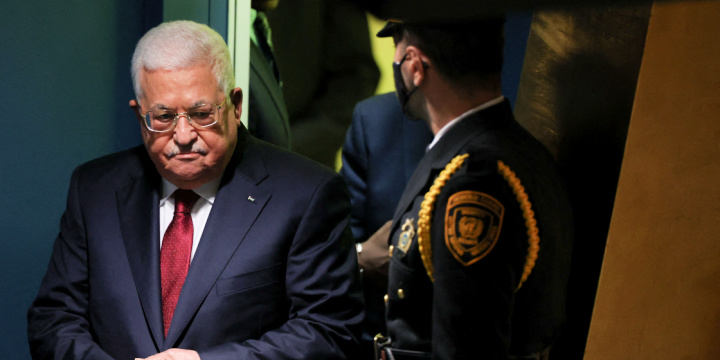 The incitement of the Palestinian Authority (PA) to murder Israelis takes many forms.

In some instances, the incitement is clear and direct, such as when PA leader Mahmoud Abbas called on Palestinians to take revenge for the death of three terrorists, and “dish out to them [Israel] twice as much as we’ve received.” In other instances, the incitement is more complex and subtle, and takes the form of glorifying imprisoned terrorist murderers and inventing libels to blame Israel for their deaths.

While the latter form of incitement is less direct, for the PA, it is often sufficient to drive Palestinians to participate in terrorism, especially when the claims are made over and over and over again, ad nauseam.

This was the case with terrorist Muhammad Kabha, who cited the insidious PA incitement regarding the death of his imprisoned terrorist murderer friend, as his reason and motivation to murder Israeli Esther Horgen, on December 20, 2020.

Imprisoned terrorist murderer Nasser Abu Hmeid died on Dec. 20, 2022, after a year and a half long battle with lung cancer. He was serving seven life sentences and 50 additional years in prison for his role in the murder of seven Israeli civilians and the injury of many others in multiple terror attacks, during the 2000-2005 PA-instigated terror war known as the Second Intifada.

Following the same pattern of incitement that drove Kabha to murder Ester Horgen, PA officials and other Palestinians are now once again banging the same drum of incitement. According to the latest PA libel, Abu Hmeid died as a result of cancer that was intentionally injected into his body, and that he was then left to die in his cell as part of a premeditated policy of medical negligence.

As Palestinian Media Watch already exposed, the incitement was led by PA chairman Mahmoud Abbas, PA Prime Minister Muhammad Shtayyeh, and their Fatah party. However, many others also joined the effort.

PLO Executive Committee Secretary Hussein Al-Sheikh, who also serves as Head of the PLO Negotiations Affairs Department, is a Fatah Central Committee member, and Head of Civil Affairs in the PA, combined the “medical neglect” libel with praise for the dead terrorist, whose body he said should be returned to his family to “honor him as is fitting for a Martyr”:

For a long time we have been investing great efforts on the regional and international level to release Nasser Abu Hmeid, who was subjected to deliberate and planned medical neglect. What interests us now is that we sent a direct request to hand over his body to his family, his friends, and his people, so that they will honor him as is fitting for a Martyr and fitting for his family, the fighting family, which all words are dumbstruck before the greatness of this family and this mother.” [emphasis added]

Abu Hmeid’s family, especially the mother of the family, Latifa Abu Hmeid, who is also known as Um Nasser Abu Hmeid, enjoy a special status in the PA — because six of their children have actively participated in terror and the murder of Israelis. In recognition of her terrorist children, as PMW exposed, Abbas even asked Latifa Abu Hmeid to symbolically lead the PA’s effort to gain full state membership in the UN.

The PA Ministry of Education Spokesperson Sadeq Al-Khadour, said that PA school activities to express their loyalty to another terrorist murderer, Karim Younes, were being turned “into an activity of mourning” for Abu Hmeid who died due to “medical neglect,” and said that the segments read out on the school loudspeakers would be dedicated to the deceased murderer. This was part of what Al-Khadour described as the PA Ministry of Educations efforts “of instilling values in the hearts of our children”:

PA Ministry of Education Spokesperson Sadeq Al-Khadour: “We are now in an activity to express loyalty to Karim Younes, as part of the project ‘40,000 letters.’ The activity has also turned into an activity of mourning over the death of late prisoner Nasser Abu Hmeid, who died due to the policy of medical neglect. Today [Dec. 20, 2022] the [PA] Ministry of Education is expressing its loyalty [to Abu Hmeid], mourning the death of the late Martyr and all the Martyrs, and standing alongside our prisoners. We emphasize that we will continue the policy of instilling values in the hearts of our children. We announced that the segments that will be read out on the school loudspeakers tomorrow will be dedicated to late prisoner Nasser Abu Hmeid and the suffering of the sick prisoners in the occupation’s prisons.” [emphasis added]

The General Supervisor of official PA media Ahmad Assaf, who holds the rank of PA minister and also serves as Chairman of the Board of the PA news agency WAFA and General Supervisor of Fatah-run Awdah TV, followed the same pro-terror messaging, claiming that with Abu Hmeid’s death, “Palestine has lost a fighter who dedicated his life to defending Palestine and its people,” and that the crime of his “assassination,” joined the list of Israel’s crimes:

General Supervisor of the Official [PA] Media [with the rank of] minister Ahmad Assaf emphasized that with the death as a Martyr of prisoner commander Nasser Abu Hmeid, 50, Palestine has lost a fighter who dedicated his life to defending Palestine and its people.

During his visit to the home of Martyr Abu Hmeid’s family, Assaf said that the crime of his assassination joins the list of the occupation’s crimes…” [emphasis added]

An editorial in the official PA daily described the death of terrorist Abu Hmeid as a “knight” dismounting his noble steed after a “confrontation with the forces of evil.” It said that he died as the result of a “racist policy, that has turned medical neglect of prisoners” into a means of harming the terrorist prisoners:

An op-ed by Lebanese journalist Hala Salameh published in the official PA daily similarly referred to Abu Hmeid as a “knight” who had been “murdered” after he was “unjustly” arrested:

Nasser Abu Hmeid is one of the stories of the knights of Palestine. Through his vigor and his body, he set out against the occupation’s hate and hostility…

The occupation murdered Nasser Abu Hmeid through a series of crimes, which ended with his death as a Martyr. He was unjustly arrested by it many times on charges of defending his land, and was given 7 life sentences.

The official PA daily also carried an image of an angel lifting the body of Abu Hmeid from his death bed, but unable to take his body, ostensibly referring to the Israeli decision to not hand his body over to the PA and his family. As PMW has shown, the burial processions of terrorists often turn into events filled with terror glorification and incitement. 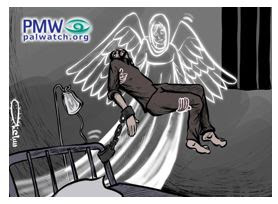 The Deputy Director-General of the PA-funded PLO Commission of Prisoners’ Affairs, Abd Al-‘Al Al-Anani, embellished the PA libel even more, claiming that Israel uses prisoners for experiments, and allows doctors and nurses in training to treat them. This, according to Al-Anani, contributes to the “wide spread of cancerous growths among the prisoners”:

Unfortunately, the world does not know that the occupation is doing experiments with medicines on the bodies of the prisoners. Also doctors and nurses in training take turns treating the prisoners. This is what explains the wide spread of cancerous growths among the prisoners in the occupation’s prisons. Other than Nasser [Abu Hmeid] there are 26 prisoners who were officially diagnosed by Israeli doctors as cancer patients. [emphasis added]

Ramallah and El-Bireh District Governor Laila Ghannam added in WAFA: “What happened is an assassination and slow murder, and not [medical] neglect.”

PA Supreme Shari’ah Judge and Mahmoud Abbas’ Advisor on Religious Affairs and Islamic Relations, Mahmoud Al-Habbash, who recently referred to Jews as “grazing herds of humanoids … apes and pigs,” added his contribution in Ma’an. According to Al-Habbash, Israel “maliciously and deliberately” assassinated Abu Hmeid, “through the policy of deliberate medical neglect, ‘slow murder.’”

The PA Minister of Justice Muhammad Shalaldeh claimed that Abu Hmeid’s death — the death of a terrorist responsible for multiple murders — was “a crime against humanity,” and breached international law:

First of all, regarding Martyr Nasser Abu Hmeid who died as a Martyr today [Dec. 20, 2022] as a result of deliberate medical neglect by the occupying power, this is considered a crime against humanity and a war crime according to the Third and Fourth Geneva Conventions, Protocol I of 1977 [to the Geneva Conventions], and the International Criminal Court regulations. [emphasis added]

The PA Minister of Foreign Affairs and Expatriates Riyad Al-Malki continued the line of using Abu Hmeid’s death, due to “medical neglect,” to attack Israel, saying in WAFA that his ministry would “work to submit prisoner Martyr Nasser Abu Hmeid’s case to the International Criminal Court.”

Maurice Hirsch, Adv. is the Head of Legal Strategies for Palestinian Media Watch, where a version of this article first appeared.