Three UK media outlets. Three stories focused on Christians in the Holy Land, all to some degree holding Israel primarily responsible for their plight. No coincidence.

On December 23, The Times of London published a well-written story from Bethlehem, stating: “The city’s Christian population has dropped from 84 per cent of the total a century ago to about 20 per cent today, and is falling further in the face of discrimination and threats from elements of the Muslim majority.”

The following day, on December 24, The Times published a significantly longer article in its magazine section that also appeared to be primarily concerned with Bethlehem. 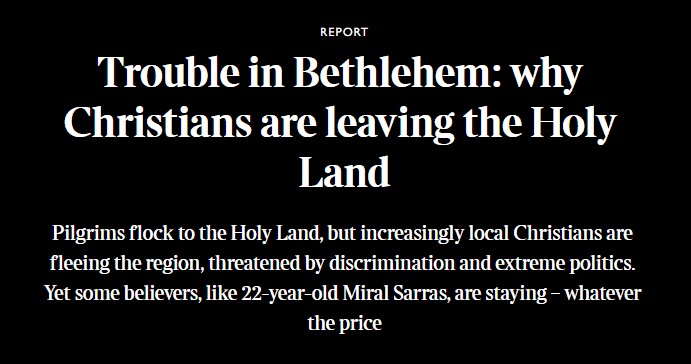 However, instead of also highlighting the “Trouble in Bethlehem” as the headline suggested, journalist Julia Llewellyn Smith moved swiftly on to Jerusalem where she wrote:

They [Christians] are emigrating, worn down by economic pressures and microaggressions from fringe radical groups that are working to “reclaim” the city from other faiths. Many Israelis don’t support these organisations, but they are backed by some members of the recently elected far-right government.

The Daily Mail’s MailOnline published a story from Jerusalem that took a very similar approach, replete with a hyperbolic headline claiming that “Christians are driven from the Holy Land”: 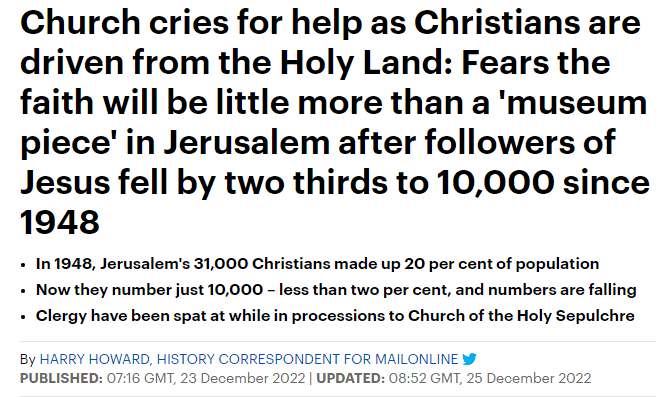 At the end of both stories was the following link: protectingholylandchristians.org

Clicking through leads to a website, “Protecting Holy Land Christians,” which states: “This campaign has been convened by the Patriarch of Jerusalem Theophilos III, along with the Heads of Churches in Jerusalem, with the aim to halting the decline of Christian communities in the Holy Land.”

Yet this campaign is not mentioned anywhere in either The Times or MailOnline stories.

Only when a third similar story appeared, this time in The Spectator, did the background become clearer as journalist Mary McDonagh wrote: “I was in Jerusalem with a press group at the invitation of Christian leaders.”

No wonder @ProtectingHLC says a highly critical Israel story in The Times of London is a “must read”: its website is included at the end of the online version although not in the print edition. Is this story sponsored by an NGO campaign? @thetimes owes its readers an explanation. https://t.co/wOAQw1ZN5s pic.twitter.com/r2fCAaSd7c

Indeed, Times journalist Julia Llewellyn Smith did not appear to have ever previously focused on Israel, while MailOnline’s Harry Howard is that outlet’s history correspondent. The Spectator’s McDonagh also had no history of Israel reports.

What they all have in common is that they appear to have been on an organized trip at the invitation of Christian leaders involved in the “Protecting Holy Land Christians” campaign. No alternative viewpoints from Israeli officials appear in the stories, which would suggest, unsurprisingly, that journalists with little to no background in covering Israel or the region, were fed a one-sided narrative that impacted their stories.

And worse, both The Times and MailOnline failed to mention that their stories were the result of an organized tour (of which we do not know if financial sponsorship was included).

Instead, a campaign site is promoted online while that same campaign by Church leaders that has succeeded in getting their narrative into three major UK media outlets with little to no transparency on those outlets’ parts.

Lack of transparency is the failure to be open and accountable to readers.

The issue of media transparency goes right to the heart of the deepest questions about journalism.

Is media objectivity possible? Is there even such a thing as true objectivity? Can’t reporters have opinions too? Shouldn’t correspondents’ experiences and worldviews enhance their work? And if journalists are working with an attitude or agenda, how can we judge the credibility of our news?

Even if it were possible for reporters to check their biases at the door, or have editors constantly whispering ethical guidelines in their ears, we’d still be placing blind trust in journalists.

The response to these questions is transparency.