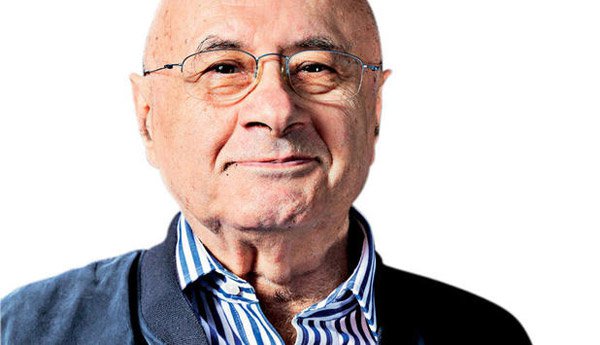 The death of Karl Pfeifer last Friday marks the end of an unforgettable and unparalleled chapter in the history of Jewish journalism after World War II.

Karl — who passed away in Vienna at the grand age of 94 — was buried on Sunday in the Jewish cemetery in Baden, the Austrian spa town where he was born in 1928 into a secular Jewish family. Karl’s personal odyssey, and later his career as a journalist, spanned the Holocaust, the creation of the State of Israel, the depths of the Cold War and then the implosion of the communist bloc, the subsequent trials of democratization, and the emergence of a renewed, full-throated nationalism in the last decade of his life. But while most people of his generation were spectators at these events, Karl was an active participant in body, mind and soul.

I was proud to call Karl a friend and a mentor. His passing leaves me greatly saddened, yet grateful for the profound impact he had on me and so many other Jewish writers and scholars who knew him to be a fount of experience and insight.

My favorite memory of Karl is a deeply personal one. In August 2014, in the middle of the war between Israel and the Hamas rulers of Gaza, my older son celebrated his Bar Mitzvah in Jerusalem. Following the service at a Sephardic synagogue in the Yemin Moshe quarter, our guests trooped in glorious sunshine to a nearby restaurant, where Karl delivered a joyful, inspirational speech. Listening to him speak, I was struck by how profoundly different his life had been at the age of 13 when compared with my son or, indeed, myself. At the same time, observing Karl standing alongside my son with the walls of the Old City visible in the background, I felt a deep sense of continuity and perhaps triumph that we had arrived at this beautiful moment, knowing that the history that got us there could have been even more punishing.

The next time I saw Karl was about one year later, when he came to New York for the premiere of a German documentary about his life, “Somehow in Between.” The 90-minute film takes the viewer through the milestones of Karl’s life, beginning with his family’s departure from Austria to Hungary in the summer of 1938, shortly after the “Anschluss,” or unification, of the Austrian state with the Nazi Reich. He recalled in the film how, on his first day at a Jewish day school in Budapest, he was called a “dirty Jew” by a passerby who spotted the school’s symbol on his cap. “I was back where I was in 1938,” he reflected. “That evoked a great anger and hate in me. I wasn’t an Austrian, and if the Hungarians called me [dirty Jew], then I wasn’t a Hungarian. Then I want to be a Jew.” Suddenly, he realized that his anxiety at not having mastered the Hungarian language didn’t matter. “It seemed silly to learn this difficult language,” he said (though he did learn it, becoming a key contact for Hungarian dissidents decades later, during the Cold War). “Why should I learn it? I don’t want to stay here.”

In 1943, at the age of 14, Karl — by now a member of the Socialist Zionist organization Hashomer Hatzair — left Hungary for a kibbutz in British Mandate Palestine. A full 36 of his relatives who remained behind were exterminated during the Holocaust. One year after his arrival, he joined the Gadna, an agency that prepared young people for service in the Haganah, the Jewish military organization. By 1946, Karl was serving in the Palmach, the Haganah’s elite fighting force. A few months before Israel’s Declaration of Independence in May 1948, Karl was transferred to a tank unit that escorted convoys carrying provisions through the Negev desert. “You sat in the dark tank, you couldn’t even raise your head, there was just a small opening,” he remembered. One one occasion, he sustained a flesh wound from a bullet to his leg. The tiny shards remained there for the rest of his life; “I still feel them when the weather changes,” he said.

After being discharged from the Haganah, and unprepared for civilian life, Karl drifted back to Europe, settling in Vienna during the early 1950s. He spent the next two decades working in the hospitality industry around Europe before suddenly turning his hand to journalism in the 1970s. The economic crisis at the beginning of that decade meant that Karl lost his job in London, forcing him to return to Vienna. Unemployed, he began traveling to Hungary, then under communist rule, delivering medical supplies from Austria. On one of his trips, he met a dissident sociologist, Tamas Foldvari, who introduced him to a group of intellectuals opposed to the regime. Back in Vienna, he told his friend, the journalist Georg Hoffman-Ostenhoff, some of the stories he’d heard while in Hungary. With Hoffman-Ostenhoff’s encouragement, Karl wrote his first newspaper article using an old Hermes typewriter. “I’ve never done anything like this before,” Karl told his friend anxiously before sitting down to write. “You’ll figure it out,” came the reply.

So began a journalistic career that sustained Karl for half a century. As well as becoming a voice for the Hungarian opposition, he became increasingly concerned with Jewish matters, waging a courageous campaign to broadcast the truth about Kurt Waldheim — the former SS officer who later became Austria’s president and then Secretary-General of the UN from 1972-81. And at the turn of this century, his encyclopedic knowledge of Zionism and of the mutations of antisemitism under communism were invaluable tools in the face of a new anti-Zionist offensive that placed a comprehensive boycott of Israel at the heart of its strategy. Throughout this time, his work was published in general and Jewish news outlets in Austria and Germany, as well as on specialist websites covering antisemitism and extremism and in his weekly column for the Budapest journal Hetek.

In his marvelous profile of Karl published by Tablet magazine in 2011, James Kirchick related how Karl was asked by a group of Austrian teenagers whether, in the wake of the trauma of the Holocaust, he had ever contemplated suicide. “Suicide, never,” he answered. “But occasionally, murder.” Yet as Kirchick pointed out, Karl did not follow the path of vengeance, motivated instead by liberal values “learned through personal experience with the two totalitarianisms of the 20th century.”

Now that Karl is no longer with us, it falls to the rest of us to preserve his contribution and his legacy. Any one of the several antisemitism research institutes that have emerged in the US and Europe in recent years would provide an ideal home for a fellowship in his name, with a focus on the two great passions of Karl’s life: penetrating, investigative journalism and the fight against antisemitism and racism.

May his memory be for a blessing.