‘A New Narrative’: Group Aims to Give Voice to Resilient Mizrahi Jewish Refugees 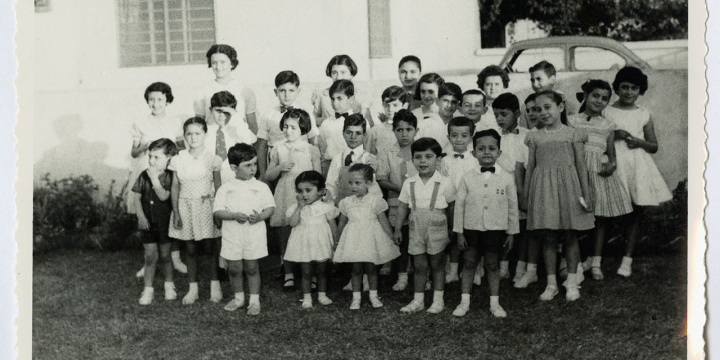 Children in an Iraqi Jewish school in Baghdad, Iraq, in 1959. Photo: Maurice Shohet via Wikimedia Commons.

“When people learn that I am from Syria and I’m a Jew they look at me like I have 18 heads,” Abraham Hamra, a 35-year-old lawyer who fled with his family to America when he was a child, told The Algemeiner recently.

For generations, being Jewish in the United States has widely meant to be Ashkenazi. That’s an assumption Uprooted, an organization co-founded by Hamra earlier this year, is challenging. At a time of increasing antisemitism and anti-Zionism, Uprooted’s founders say raising representation for Jewish refugees from Arab countries and awareness of their harrowing personal stories can redefine the political discourse around Jews and Israel in the United States.

“We need to break that classification of Jew as this white man because that’s not a true classification,” Hamra, the president of Uprooted, said. “That’s one of the main goals; to really fight back and counter that ideology. Instead of just targeting every specific incident of antisemitism, we’re more focused on the root causes of antisemitism, which comes from a specific ideology. We see that it stems from this totally misconceived idea that that Jews are just white supremacist colonizers with no roots in the Middle East.”

Jewish presence in the Middle East and North Africa date back to more than 2,500 years ago but from what was once an estimated 1 million Jews living in North Africa, the Middle East and the Gulf region, today less than 4,500 Jews remain in Arab countries, figures show. Between 1948 — when the state of Israel was founded — and the early 1970s, an estimated 850,000 to 1,000,000 Jews from Arab countries were forced to flee after waves of pogroms and relentless government repression against Jews. It is this tragic history which the group says it wants to share with the world.

For Hamra, who has his own memories of discrimination as a child growing up in the Syrian city of Damascus — a metropolis with legendary Jewish history — the mission of Uprooted is deeply personal.

He recalled one instance, as a child, when a woman instructed her son to throw a stone at him because he was Jewish. He still has the scar on his forehead to remind him of the incident.

Hamra’s father worked in the clothing industry and whenever he needed to leave Syria for work, the rest of the family was forced to turn over their passports to the “mukhabarat” (secret police), who wanted to prevent them from attempting to leave the country with his father, since Jews were not allowed to immigrate out of Syria until the 1990s.

He also recalled the story of his family during the Yom Kippur War in Syria.

“The whole neighborhood broke into chants declaring victory over Israel on the first day,” he said. “They were screaming ‘Kill the Jews.’ They were screaming the names of our [Jewish] neighbors, identifying their families. My grandfather took the entire family to the bedroom. They pulled up the mattress at the bed, blockaded the door, and they stayed there for the entire day. Their reality was shattered.”

By 1994, the family had endured enough and immigrated to the United States. They were part of the final wave of Jews migrating from Arab countries in the 1990s. Today, there are an estimated 250 Jews living in Syria, a decrease of almost 50,000 over half a century, according to historical estimates.

In the wake of such widespread dispossession, hundreds of thousands of Jews fled to Israel where Mizrahi culture enjoys mainstream appeal and influence, while a much smaller proportion came to the United States.

“Within the United States, we’re a minority within a minority,” Hamra said with a chuckle.

The number of Mizrahi Jews living in the United States is a notoriously difficult figure to pin down though most estimates range from 15-20 percent of the American Jewish community, according to Jason Guberman, executive director of the American Sephardi Federation. There are no exact numbers due in large part to communal mistrust, said Dr. Saba Soomekh, an Iranian-American expert on Middle Eastern history.

“Middle Eastern Jews have been persecuted for so long in the Middle East by different governments and regimes that they are distrusting of someone knocking on their door, from the government, asking personal questions about them — especially wanting to know about their religious affiliation,” Sommekh noted.

The result has been a community still searching for widespread acceptance and recognition in the American public discourse.

Another reason the Mizrahi perspective been relegated to the shadows for the past 50 years is, according to Hamra, a type of communal embarrassment.

“A lot of these Arab-Jewish refugees felt a tremendous amount of shame,” he said. “They never spoke about it. They were only concentrating on rebuilding their lives as quietly and diligently as possible. We never injected ourselves into politics.”

For Uprooted, those days are over.

Nowhere has Mizrahi erasure been more obvious than in the halls of Congress, Uprooted leaders say. At a time when US politicians and international diplomats are trying to pass binding resolutions that call Israel’s founding a ‘catastrophe,’ the group is planning to move on the political offensive.

In November, Uprooted released a petition against House Resolution 1123 introduced in May by members of Congress, led by Rep. Rashida Tlaib (D-Mich.), which calls for US recognition of the Palestinian “nakba,” a term meaning “catastrophe” that is used by Palestinians to refer to the establishment of the State of Israel. Uprooted argues that the proposed legislation is based on the illusion that Jews have no history in Israel or the Middle East.

“It runs afoul on truth and runs afoul of bipartisanship,” Hamra said about Resolution 1123. “Bringing this petition to light can do tremendous good for the entire narrative. I think this [petition] can introduce the public to the Jewish refugees [of Arab countries] and really challenges the narrative to say look, what happened in Israel in 1947…it wasn’t a catastrophe. It was a miracle for a million other Jews.”

Beyond political advocacy, Uprooted is launching a multi-pronged social media strategy this January that will highlight different Arab countries and the history — from culture to politics — of their Jews. The project, which Uprooted started this month on its Instagram Stories with a focus on Algeria, will last 10 months, culminating in November, which is Mizrahi Heritage Month.

For those who believe the false narrative that Israel is to blame for the persecution Jews faced in Arab countries, this project will prove them wrong, Hamra said.

“The rhetoric that we’re anticipating is ‘Yeah, we understand what happened to the Jews from Arab countries, but this is all Israel’s fault. This was a Zionist plan to fill up Israel with Jews and so they started problems in all these Arab countries until the Jews left and they got what they wanted. So if Israel never existed, your Jewish community in Israel would be thriving today.’ But that’s not the truth,” he explained.

In one video testimony already shared on Instagram, filmed in collaboration with StandWithUs, Rabbi Albert Gabbai, a Jewish refugee from Cairo, talks about being rounded up with his family and forced to live in a concentration camp in Egypt where they were “physically, mentally and psychologically tormented” for three years before they were allowed to leave their home country.

The campaign is quickly picking up support across the American Jewish world.

“Our missions are similar in that we are both dedicated to fighting antisemitism by raising awareness through innovative education, inspiration, and outreach,” said Roz Rothstein, co-founder and CEO of StandWithUs.

The group also wants to help high school teachers educate their students about the history of Jewish refugees from Arab countries. It hopes to work with Israel’s Ministry of Education and the group Jews Indigenous to the Middle East and North Africa (JIMENA) to translate such lesson plans that are already in place in Israel, and bring the school material to the US.

“Mizrahi and Sephardi Jews need more representation in Jewish communal spaces and we support emergent leaders and ideas that advance the heritage, history, and rights of Jews from the Middle East and North Africa,” said JIMENA’s Executive Director Sarah Levin.

Uprooted is also interested in helping other minority groups throughout the city and state of New York that have felt marginalized find their voice and get the representation and recognition they deserve.

“We want to show other groups which feel oppressed that they do not have to reside in that victimhood and oppression,” Hamra said. “As a group that escaped unthinkable horrors and rebuilt their lives, we believe that we are in the position to really help.”