‘I Have to Remain Optimistic,’ Ukrainian Ambassador to Israel Says, as Netanyahu Government Deliberates Over Military Assistance 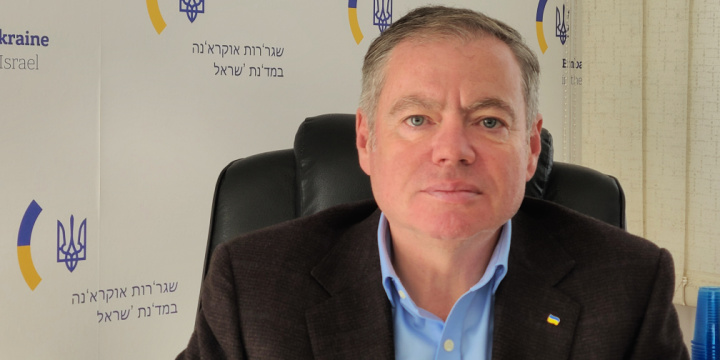 Yevgen Korniychuk, Ukraine’s Ambassador to the State of Israel, in his office in Tel Aviv. Photo: Ben Cohen/The Algemeiner

Yevgen Korniychuk, Ukraine’s Ambassador to the State of Israel, draws upon a Biblical analogy when explaining his country’s determination to secure a future free from Russian domination and invasion.

Since the dissolution of the Soviet Union 30 years ago, Ukrainians had experienced a similar psychic transformation, he continued. “We hold free and independent elections and we have changed presidents six times,” Korniychuk explained. “Ukrainians have traveled to western Europe, bringing back with them western technologies and an understanding of how the west operates. We aspire to be part of the EU and NATO.”

By contrast, the ambassador went on, “there has been no democratic election in Russia for the last 22 years. And as a society, Russia has developed with no democratic values.”

This depiction of the Russian invasion of Ukraine as a profound clash of civilizations and political philosophies — in which Ukraine represents an open, forward looking society, and Russia is a cauldron of often fabricated historical grievances that express themselves through deadly violence — has been a central theme in Ukrainian appeals to western nations for military assistance.

A confident, softly-spoken diplomat whose record includes a stint as Ukraine’s consul-general in New York during the 1990s,  Korniychuk’s main task in Israel has been to persuade its leadership to align with western nations like the US, the UK, France and Germany in supplying his country with military, in addition to humanitarian, aid. Though his body language gives little away, making the case for his embattled country has clearly been an irksome mission for Korniychuk, complicated by Israeli concerns over Russia’s military presence in neighboring Syria; the fear, grounded in historical experience, that the Kremlin will turn its venom towards Russia’s vulnerable Jewish population as its war aims continue to be frustrated; the change of government last month, when Israelis elected a right-wing nationalist coalition headed by Prime Minister Benjamin Netanyahu; and the anxiety that weaponry supplied by Israel would eventually end up in enemy hands, allowing Iran and other deadly adversaries of the Jewish state to reverse engineer Israel’s own military technology.

“I am reminded of [former US Secretary of State Henry] Kissinger’s observation that Israel has no foreign policy at all,” he remarked with a laugh. “Foreign policy is just an extension of domestic policy.”

Although Ukrainian leaders from Zelensky downwards have articulated disappointment with Israel’s refusal to match its extensive humanitarian operation with military assistance — especially as Iran has supplied Russia with the Shahed drones that have devastated Ukraine’s civilian infrastructure in recent months — Korniychuk is clear that “it is not accurate to say that the Israelis have been doing nothing.”

Emphasizing that Ukraine “appreciates all the assistance that we receive,” Korniychuk was nonetheless adamant that “we definitely need more.”

For almost a year, Korniychuk has been trying to convince Israeli leaders to share their smart warning system that anticipates the targets of incoming missiles with pinpoint accuracy. “It will tell us the amount of time, down to the specific seconds, that we have to get people safely to shelter,” he said. At the moment, Ukraine’s present system can detect missiles heading towards a particular oblast (administrative district), but not the individual targets.

“This is not a weapon at all,” Korniychuk stressed. “But it is a vehicle that would enable the saving of lives.”

While the previous centrist government of former Prime Minister Yair Lapid shunned contact with Moscow and expressed strong political support for Kyiv — without budging on the question of military assistance — there are concerns in Ukraine that Israel’s new government will realign itself with Moscow, a perception bolstered by the recent pledge of newly-appointed Foreign Minister Eli Cohen to “speak less” about Russia’s aggression against its southern neighbor. More fundamentally, Netanyahu has long boasted of his warm relationship with Russian President Vladimir Putin, going so far as to claim in his recently-published memoir that Putin is “smart, sophisticated and focused on one goal—returning Russia to its historical greatness.”

Even so, Korniychuk said he was encouraged to learn that Ukraine is “one of the top three priorities” for Israel’s foreign ministry, suggesting that this might lead to a “shift for more defensive equipment for Ukraine, anti-drone and anti-missile.”

“Iran has become an open Russian ally,” he said. “That must bring us closer together.”

Still, Korniychuk is willing to allow Netanyahu some time to reexamine Israel’s stance.

“To expect Netanyahu to make such a decision on day one [of his new government] is unrealistic,” Korniychuk said. He noted that Netanyahu had spoken by phone with Zelensky on his second day as prime minister, but that Zelensky was left downcast by their discussion. “As the ambassador, I have to remain optimistic,” he insisted. “If I am pessimistic, I may as well retire.”

Kornyichuk also highlighted the changing strategic situation in the Middle East, arguing that developments over the last year warranted a revision of Israel’s position on military aid. Last October, the first reports emerged of Russia drawing down its combat troops stationed in Syria, redeploying them to Ukraine. An unnamed Israeli defense official told the New York Times that Moscow had “transferred some troops and a Russian air-defense system out of Syria, removing one of the main restrictions on Israeli military actions in Syria.” As a result, the government of Turkey is now a more practical address for Israeli concerns regarding Syria, Korniychuk said.

On the question of Russia’s Jewish community, which is as exposed to Putin’s conscription policy as any other group in the country, and which is currently countering the Putin regime’s attempt to shutter the Jewish Agency, which assists with immigration to Israel, Korniychuk urged Israel to show the same regard for Jews in Ukraine. “We have a huge Jewish community that stayed in the country, in Dnipro, Kyiv, Kharkiv, Odessa and other places,” he said. “We are proud that they are a part of Ukrainian society.” As far as the Jewish Agency’s operations in Russia were concerned, “I can assure you that they will shut it down,” he said. “It’s only a matter of time.”

Asked about Ukraine’s vote in favor of an anti-Israel resolution at the UN last November, Korniychuk said he was trying to mend fences, pointing out that Ukraine did not vote against Israel in a subsequent UN resolution, following Zelensky’s conversation with Netanyahu. But, he added, “assuming that Ukraine votes 100 percent of the resolutions in favor of Israel, will Israel change its position in terms of providing us with defensive means or not? I am glad that Ukraine did not vote against Israel with the last resolution, which means that we are keeping the door open. But we also want our partners to understand that this is not a one-way street, ok? We want our partners to think about our needs.”

Korniychuk also underlined that he is open-minded when it comes to possible Israeli mediation to end Russia’s offensive, pointing out that Kyiv has welcomed outside intermediaries on such matters as prisoners of war and the export of Ukrainian grain to the developing world.

“I have to admire Netanyahu’s diplomatic abilities,” he said, calling on the Israeli leader to offer his backing for the 10-point peace plan presented by Zelensky last November, which demands among other measures respect for Ukraine’s territorial integrity, the establishment of an international tribunal to try Russian war crimes, effective international guarantees to safeguard Ukraine’s food and energy security, and protection for the Zaporizhzhia nuclear power plant, the second-largest in Europe.

“I do believe that Mr. Netanyahu is a very experienced politician, and that he understands the difference between Putin two years ago and Putin now, after mass murder, the shelling of civilian infrastructure, and the killing and rape of women and children in Ukraine,” Korniychuk said. “This is a different person that not many western leaders are even willing to speak to now.”