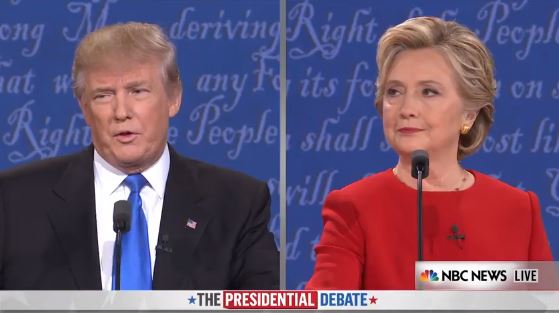 JNS.org – Donald Trump and Hillary Clinton squared off in their first presidential debate on Monday evening, where the candidates sparred over Middle Eastern policy, including the fallout over the Iran nuclear deal and how to handle the Islamic State (ISIS).

Trump charged Clinton with being largely responsible for the “total mess” in the region, saying, “You started the Iran deal…they [Iran] were choking on the sanctions, and now they’re going to be probably a major power at some point pretty soon, the way they’re going.”

Clinton said that when she came into office as secretary of state in 2009, “Iran was weeks away from having enough nuclear material to form a bomb,” and through her support for imposing sanctions, she helped “drive them to the negotiating table, and my successor, John Kerry and President Obama got a deal that put a lid on Iran’s nuclear program without firing a single shot.” She defended her actions in laying the groundwork for the widely criticized deal as examples of “coalition building” and “diplomacy.”

While Israel was not mentioned directly during the debate, Trump did reference Israeli Prime Minister Benjamin Netanyahu’s opposition to the Iran nuclear deal.

“This is one of the worst deals ever made by any country in history,” Trump said. “I met with Bibi Netanyahu the other day. Believe me, he is not a happy camper.”

Trump also claimed that Clinton has unsuccessfully spent her “entire adult life” fighting ISIS — a statement debunked by fact-checkers — and Clinton responded by saying that, “I, at least, have a plan to fight ISIS,” referring to the Republican candidate’s failure to detail how he would take on the terror organization.

This past Sunday, on the eve of the presidential debate, the candidates met separately with Netanyahu in New York City.

Following the sit-downs, Netanyahu said that both Clinton and Trump, “spoke about their support for Israel and the importance of relations between our countries.” The prime minister added, “It doesn’t matter which of them will be elected, US support of Israel will remain strong, our pact will remain strong and will even get stronger in the coming years.”