Why Did Nearly 40 Percent of Norwegians Compare Israelis to Nazis? 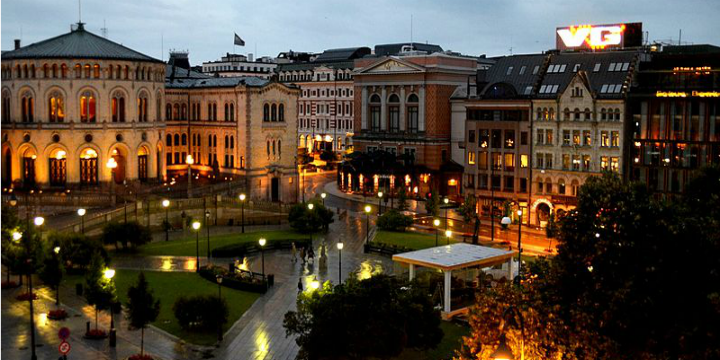 Not long ago, a poll taken in Norway showed that 38 percent of Norwegians actually believe that Israel treats the Palestinians like the Nazis treated Jews. Around the same time, the Oslo municipality published a study on harassment of children in Oslo high schools. It found that one-third of Jewish high school students were harassed verbally or physically at least twice a month. In any culture, the tone comes from the top — and Norway’s festering zeitgeist of antisemitism proves this point.

A few weeks ago, former Norwegian Foreign Minister Jonas Gahr Støre, unleashed another one of his hate-filled salvos against the Jewish state. The Norwegian Labor Party opposition leader asserted that decisions taken in Israel in recent months make the country an apartheid state. Støre insisted that there are people who are treated unequally in Israel, which is contrary to democracy. Still, the veteran anti-Israel hate-monger falsely insisted that his party is not only a friend of the Palestinians, but also of Israel.

Over the years, Støre’s statements about Israel confirm that he is an astute inciter. He delivered his latest slander at the annual gathering of the party’s youth movement, AUF, on the island of Utøya. Indeed, anti-Israel incitement is traditionally part of the youth movement’s retreat. In this way, the Labor Party ensures that the next generation of Norwegian Social Democrat leaders will also be Israel haters. The annual AUF Utøya meetings became internationally known when Norwegian terrorist Anders Breivik murdered 69 participants there in July 2011.

Ivar Fjeld was a local AUF leader when he participated in the Utøya camps in 1986 and 1987. Years later, when he became a Christian activist, he exposed what took place in those AUF camps. Fjeld said that, in his time, there were Palestinian participants who used drugs and shared them with Norwegian youngsters. Complaints to the AUF leadership did not lead to any action at the conference.

In 2011, the year of Breivik’s attack, demonizing Israel was a programmatic highlight. AUF leaders and visiting anti-Israel lecturers took the lead in bashing Israel and a huge banner at the camp called for the boycott of Israel. That year Støre also visited Utøya. While he spoke out against the boycott of Israel, he posed alongside AUF leader Eskil Pedersen for a photograph in front of a boycott banner. Støre declared that Israel’s “separation wall” should be dismantled. Yet he never addressed why the fence was built in the first place — specifically, endless suicide bombings against Israeli civilians.

Among other prominent Norwegians who slander the Jewish state, two stand out. In 2009, Norwegian pro-Hamas doctors Mads Gilbert and Erik Fosse published a book, Eyes in Gaza, focusing on Israel’s Gaza ‘Cast Lead’ operation, during which the authors worked together in a Gaza hospital. Yet they omitted the fact that the hospital also served as Hamas headquarters.

In their book, Gilbert and Fosse claimed falsely that Israel entered the Gaza Strip to kill women and children. Støre wrote a back-cover comment for their hateful book, praising the authors for their role in Gaza. The Labor Party leader and Norwegian prime minister at the time, Jens Stoltenberg, phoned Gilbert and Fosse to tell them that the government and the Norwegian people were behind them. Today, Stoltenberg is secretary general of NATO.

In 2009, a Norwegian diplomat, Trine Lilleng, first secretary at the Norwegian Embassy in Saudi Arabia, sent an email from her embassy account. In it, she juxtaposed pictures of dead children in Gaza with photos of murdered Holocaust victims. Støre visited Israel a few weeks later and told the media that Lilleng was no longer in Riyadh. Four months later, Israeli journalist Cnaan Liphshiz phoned the Norwegian Embassy in Saudi Arabia and asked for Lilleng. He was told that “Consul” Lilleng would be in later that day.

Recently, toward the end of his posting in Oslo, Israeli Ambassador Raphael Schutz became fed up with the widespread incitement against his people. He stated on his Facebook page that those who claim Israel is an illegitimate state, deny its right to exist, and compare Israel with Nazi Germany are descendants of former Norwegian Prime Minister Vidkun Quisling, who, during World War II, arrested Norwegian Jews, and was responsible for the looting of Jewish-owned properties.

Quisling is one of the few Norwegians whose name is internationally known. It has become a generic expression for a turncoat and collaborator with the enemy. Norwegians reacted strongly to the Israeli ambassador’s statement. It seems it hit a raw nerve by exposing a major element of the country’s multi-faceted and continuing antisemitic history. Rather than owning up to that dark chapter in their history, too many find comfort in the big lie that today’s Jews are no better that yesterday’s Nazi Genociders.

Norwegians, offended by Ambassador Schutz’s truth-telling, should reckon with it by learning unlearned lessons from Norway’s past maltreatment of its Jewish citizens and building bridges with their Jewish neighbors and the Jewish state. Rejecting a false narrative of the Israeli-Palestinian dynamic would be a great place to begin the hard work of healing.

Dr. Manfred Gerstenfeld is a prolific author and expert on European antisemitism. He is the former Chairman of the Jerusalem Center for Public Affairs.

A different version of this article was originally published by NewsMax.