People take a knee during a Black Lives Matter rally, as protests continue over the death in Minneapolis police custody of George Floyd, outside the US Capitol in Washington, DC, June 3, 2020. Photo: Reuters / Jonathan Ernst.

Outraged people take to the street in protest, demanding justice for George Floyd. But others quickly jumped in to exploit a crisis.

Israel bashers saw an opportunity: a chance to further sow hatred and suspicion against Jews and Israel.

Al-Awda, the Palestine Right of Return Coalition, which has ties to terrorist groups in the Middle East, issued a statement Monday that featured a cartoon showing an American police officer and an Israeli soldier, arm-in-arm, sitting with their knees over the necks of a black man and a Palestinian man respectively. 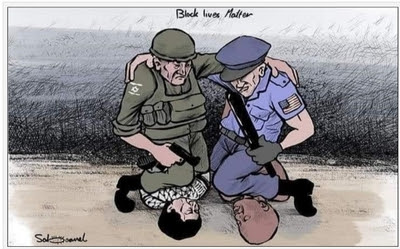 “As indigenous people of Palestine,” the Al-Awda statement said, “we have firsthand experience of what it’s like to live under the boot of white/European settler-colonialism, apartheid, and racist genocidal violence as it is wielded by Israel’s regime of oppression — with the military funding and unconditional support of the US government — to dispossess us, ethnically cleanse us, and reduce us to lesser humans.”

It called for the “Release of all Black political prisoners in US jails,” including convicted cop-killers, whose crimes Al-Awda discarded as “defending their people.”

It also called for the “dismantling of the current structures of US policing, including putting a permanent end to the ‘Deadly Exchange’ between the US and Israeli repressive forces, which has included the Minnesota police. This alliance is deadly both to Black and Palestinian communities.”

This is a reference to the Anti-Defamation League (ADL)’s week-long “Leadership Seminar in Israel” program that has hosted more than 200 American police officials since it started in 2003. Israel-bashers have spent years inciting antisemitism by exaggerating the program’s influence in an attempt to link the cause of US police killing unarmed black people with Palestinian nationalism. In 2014, when Michael Brown was killed by a Ferguson, Missouri police officer, the BDS movement tied Israel to his death by coining a slogan: “From Ferguson to Palestine.”

In fact, the ADL program includes no hands-on, tactical training.

Rather, participants on a 2018 trip met with officials ranging from a “Christian-Arab Police Chief overseeing Jerusalem’s Old City, to the Palestinian Commander of the Bethlehem District; from a mother who survived a near-fatal terror attack who is dedicated to instilling courage in children of disabled parents, to an astute Palestinian journalist who offered an overview of the region’s challenges.”

But as the Al-Awda statement shows, facts aren’t going to get in the way of an incendiary narrative.

Antisemitic Palestinian advocate Linda Sarsour has made the argument that the ADL — the nation’s most recognizable Jewish organization — is responsible for police killings in America before at least two significant audiences: the 2018 Islamic Society of North America (ISNA) convention, and during the 20th anniversary of the Million Man March on Washington that was organized by Louis Farrakhan.

“If you believe in the idea of ending police brutality and the misconduct of law enforcement officers across the country,” Sarsour said at the ISNA convention, “then you do not support an organization that takes police officers from America, funds their trips, takes them to Israel so they can be trained by the Israeli police and military, and then they come back here and do what? Stop and frisk, killing unarmed black people across the country.”

The Floyd killing pumped new energy into that blood libel:

If anyone actually reads the fine print of the accusations made by the anti-Israeli groups and activists, they won’t find anything to back up their contrived claims.

For all the allegations made by JVP, USCPR, Samidoun, the Democratic Socialists, Sarsour and so many others, no one has identified any actual Israeli training that encourages shooting or killing unarmed people of any kind. There is no evidence that the program has played any role in any deadly American police action.

The JVP report Ahmed relies on, for example, is incredibly thin on specifics. Instead, the report makes the sweeping claim that American police learn “an official policy of marking entire populations as suspect, a model that is in direct opposition to efforts to end the racial profiling that has long been constitutive of American policing.”

Yet, in nearly 20 years of an ADL program that works with police officials who are black, white, Latin, male, and female, not one participant has claimed the instruction came anywhere close to racism or advocated any kind of abuse.

A second organization, the Jewish Institute for National Security of America (JINSA), also runs an exchange program matching American police with their Israeli counterparts. JINSA director of Counterterrorism Programs and former assistant FBI director for counter-terrorism Steven L. Pomerantz wrote in 2018, “Programs like these do not provide military-style training to participants, nor do they encourage suppression of political rights and civil liberties.”

But a narrative doesn’t always need evidence to be effective. And some protesters seem to buy the narrative. A Los Angeles synagogue, Congregation Beth Israel, was defaced with “free Palestine” and “f*** Israel” spray-painted on its front wall.

Instead, it’s a simple equation. The people trying to connect George Floyd’s killing to the world’s only Jewish state believe everything about Israel is bad. It’s no coincidence that some of the same people blaming Israel for the death of George Floyd were also behind the blood libel that Israel was deliberately spreading the coronavirus among Palestinians.