On September 21, the BBC One program Panorama aired an episode titled “Banking Secrets of the Rich and Powerful“:

It’s the leak that reveals the secrets of British banking. Panorama uncovers secret reports that expose how banks have failed to tackle crime and how terrorists, money launderers and crime bosses are able to use the same banks as us. Reporter Richard Bilton also exposes the double life of the man who funded the Brexit Party, secret deals at the top of British football and the business deals billionaires would rather you didn’t know about.

The basis for that program is a leak of documents known as the FinCEN Files, described by the BBC in one of its numerous recent written reports on the same story as follows:

The FinCEN files are more than 2,500 documents, most of which were files that banks sent to the US authorities between 2000 and 2017. They raise concerns about what their clients might be doing.

These documents are some of the international banking system’s most closely guarded secrets.

Banks use them to report suspicious behavior but they are not proof of wrongdoing or crime.

They were leaked to Buzzfeed News and shared with a group that brings together investigative journalists from around the world, which distributed them to 108 news organizations in 88 countries, including the BBC’s Panorama programme. …

Fergus Shiel from the International Consortium of Investigative Journalists (ICIJ) said the leaked files were an “insight into what banks know about the vast flows of dirty money across the globe.”

Somewhere along the line, the BBC decided to deviate from the topic of money laundering and crime in order to promote a topic it has touted in the past. One of the results of that editorial decision is a filmed report that appeared on the BBC News website on September 21 under the headline “The settlers’ billionaire backer” and the subtitle “Israeli settlers’ Chelsea boss backer“:

An investigation by BBC News Arabic has found that Russian oligarch Roman Abramovich controls companies that have donated $100m to an Israeli settler organization.

Elad operates in occupied East Jerusalem. By allowing settlement activity in the area Israel is considered to be in breach of international law. Israel disputes this view.

Analysis of bank documents has revealed that Chelsea football club’s owner Abramovich is the biggest single donor to the organization. The bank documents — known the FinCEN Files — were leaked to BuzzFeed News, then shared with the International Consortium of Investigative Journalists (ICIJ) and the BBC.

Elad also runs the City of David and other archaeological sites, visited by a million tourists each year in Jerusalem.

There are arguments that Israel is breaking international law by allowing exploratory archaeological digs to be carried out in occupied land.

Visitors to the BBC Arabic website found a version of the same film — which is three times longer than the one originally promoted on the English language website — together with a written report on the same story. An English language version of the longer film also exists (and was later also posted on the BBC news website) and the topic was the subject of an audio report (from 37:50 here) by BBC Arabic’s Murad Shishani aired on the September 21 edition of the BBC World Service radio program Newshour.

The version of the film appearing on the BBC News website is credited to three people: “Produced by Rosie Garthwaite, Uri Blau and Simon Cox.”

BBC Arabic producer Rosie Garthwaite was in the news earlier this month when the Jewish Chronicle exposed her “history of anti-Israel social media activity.” Long time readers may recall BBC Arabic’s investigations editor Simon Cox — and of course Uri Blau is the Israeli “investigative journalist” usually published at Haaretz, who in 2012 was convicted of unauthorized possession of classified documents after having fled to London.

As is standard practice in BBC content, the portrayal of the area in Jerusalem which is the focus of the BBC’s film excludes any mention of events before June 1967. BBC audiences are told nothing about the relevant history of Silwan, including the fact that Yemenite Jews who had lived in what was known as Kfar HaShiloach since the early 1880s were evacuated by British forces in 1938 due to Arab rioting. Neither — also in line with BBC standard practice — do audiences hear even a passing mention of the 19-year Jordanian occupation of what the BBC chooses to term “East Jerusalem” or the legal status of the area prior to the Jordanian invasion:

In 1967 during the Six-Day War, Israel occupied the West Bank and East Jerusalem. There are 220,000 Jewish settlers living in East Jerusalem. They live among at least 341,000 Palestinians. Under international law, the area is considered to be occupied territory and the settlements are deemed illegal. Israel does not accept this view and neither does the Trump administration.

The image shown on screen during that standard BBC portrayal of “international law” shows UNSC resolution 2334, which of course was adopted under the non-binding Chapter VI of the UN Charter — and is not international law. 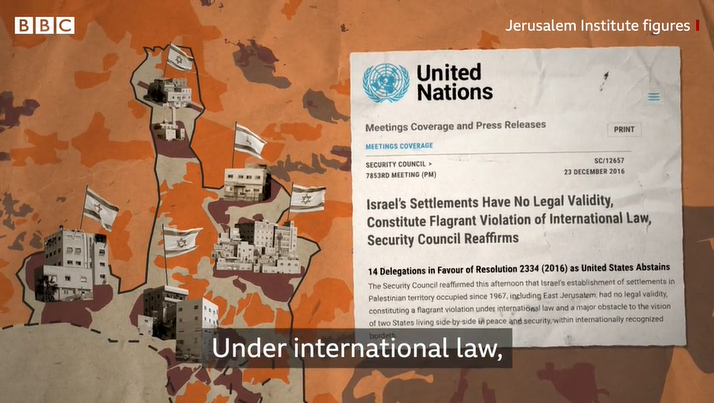 The BBC’s film informs viewers that:

To the millions of tourists who have visited the City of David, Elad presents itself as an archaeological organization, focused on telling the story of ancient Jerusalem. Elad says the biblical city of Jerusalem, captured by King David over 3,000 years ago, is located here. [emphasis added]

Elad is — of course — far from the only body to identify the location thus: the Israel Antiquities Authority is of the same view, and it has been the site of archaeological excavations since the 19th century.

The film includes substantial comment from Hagit Ofran of the organization Peace Now — which is one the political NGOs most quoted and promoted by the BBC, including on this topic. Although BBC editorial guidelines on impartiality clearly state that audiences should be informed of the “affiliations, funding and particular viewpoints” of outside contributors, viewers hear nothing about the significant funding from foreign governments received by Peace Now or its political agenda, which includes opposition to the archaeological work in the City of David.

Viewers are told that:

Elad has not responded to the BBC’s question about whether tourism was a way for them to enable more Jewish settlement in the area.

No explanation is given regarding the supposed rationale behind that “question,” and viewers are left to guess how archaeological tourism could “enable more Jewish settlement.”

Using a graphic which begins in the year 2000 when tourism to Israel plummeted because of the Second Intifada, the film comes up with another dubious claim:

Over the years, the total number of visitor’s to Elad’s (sic) City of David has increased dramatically. And some never left. There’s also been a gradual, but steady, growth in the number of Jewish settlers who have been settled by Elad in Silwan. All this growth has cost a lot of money. And Elad relies heavily on donations to fund its work. [emphasis added]

The BBC’s graphic in fact shows “steady growth” of just 300 people over a period of 29 years. 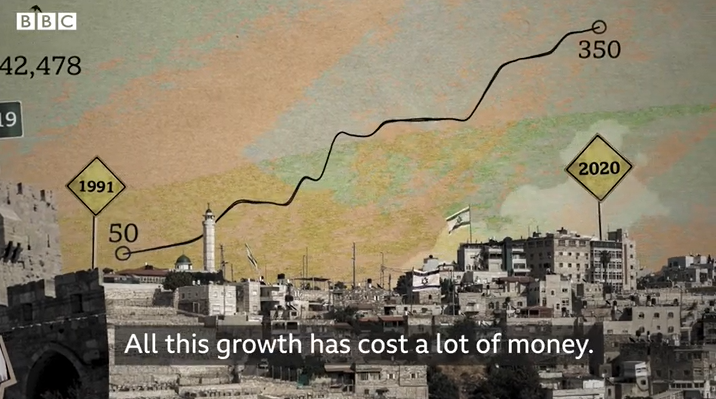 Not long after Hagit Ofran’s presentation of a map showing, inter alia, the Old City of Jerusalem as a “Palestinian area,” viewers hear her state that:

Every organization, according to the law, is obliged to disclose their donations above a certain amount. They [Elad] submitted a list but it said nothing.

Ironically, the BBC has apparently forgotten that it has in the past amplified opposition to such financial regulation from Israeli political NGOs, including Peace Now.

The BBC’s film begins and ends by showcasing the Sumarin family from Silwan.

The Sumarin family are on their way to Jerusalem District Court. They have to prove they have the right to live in the house members of their family have lived in since 1959. … With funding and support from NGOs and the Palestinian Authority, the family have been fighting an Israeli eviction order since 1991.

The shorter version of the film fails to clarify that one of the NGOs supporting and enabling the Sumarin family’s campaign is Peace Now. Another is Ir Amim — which, like Peace Now enjoys funding from foreign governments, which remains undisclosed by the BBC — and that political NGO’s public activity coordinator appears in the longer version of the film without any identification.

The shorter English-language film initially promoted on the BBC News website fails to provide any further factual information concerning that long-running legal case, and members of the family are given an unchallenged platform from which to promote their messaging. In contrast, the written report in Arabic provides explanation of the fact that the actual owner of the property died in 1983 and that the house “was acquired by the State of Israel according to the Absentees’ Property Law of 1987” and subsequently transferred to the JNF subsidiary Himanuta. The BBC makes no mention of the fact that the transfer was in exchange for JNF owned land in the Kfar Qara area of Israel, upon which residential neighborhoods were built for the Arab sector.

While the BBC’s film is careful not to describe the featured members of the Sumarin family as the property’s owners, it does not clarify that the court ruled that they do not legally own the house.

This is, of course, far from the first time that the BBC has focused audience attentions on the topic of Silwan and the activities of Elad. In March of this year a BBC travel show featured the City of David archaeological site along with an inadequately introduced activist:

A November 2017 BBC Two TV program about the Balfour declaration featured an activist from Silwan:

In October 2014, visitors to the BBC News website read about a terror attack “carried out by a Palestinian man from Silwan in East Jerusalem, where tensions are high among Palestinians who are angry over Jewish settlements in the area”:

In May 2014, the BBC’s Middle East editor Jeremy Bowen visited the City of David archaeological site (complaining that Palestinians do not appear in its film about Jerusalem as it was 3,000 years ago) and Silwan:

Like this latest BBC project concerning Silwan, all that previous BBC reporting promotes a narrative which encourages audiences to view the purchase of property in certain areas of a city by people of one specific faith and ethnicity as “illegal” and undesirable. As we have observed here in the past:

One has to wonder whether the BBC’s “progressive” approach would extend to encouraging its audiences to view neighborhoods of mixed religion, ethnicity (and perhaps color or sexual orientation) in any other city in such a light.

Obviously, the sole flimsy connection between this BBC Arabic “investigation” and the BBC’s broader FinCEN files project is the fact that the BBC has discovered that companies registered in the British Virgin Isles which have legally and openly donated to Elad are linked to Roman Abramovich.

BBC Arabic has merely employed that information as a hook on which to produce multi-platform, multi-language amplification of a narrative that the corporation has been pushing for years, while carefully avoiding the issue of donations from foreign governments to Israeli NGOs that campaign to promote that same politically-motivated narrative.