At least two summer camps organized by the PLO Supreme Council for Youth and Sports this year were named after the female terrorist murderer Dalal Mughrabi, who led the terrorist attack that slaughtered 37 civilians, among them 12 children, in 1978. The image above shows a group of female summer camp participants making a “V” for victory while standing in front of a banner featuring a picture of the terrorist, Mughrabi.

Text on banner: “The [PLO] Supreme Council for Youth and Sports

and the [Fatah] Shabiba High School Committees warmly welcome you

to the Sisters of Dalal Mughrabi summer camp”

[Facebook page of the PLO Supreme Council for Youth and Sports, Aug. 4, 2021]

Whereas this camp was in the Tubas area in the northern West Bank, at least one other camp promoted the murderer — The Sisters of Dalal summer camp in Tulkarem: 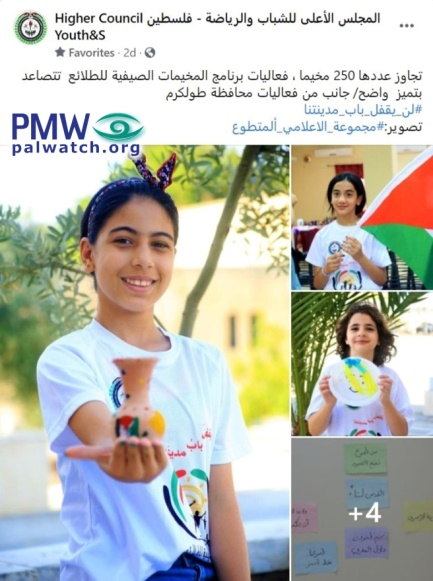 (Facebook page of the PLO Supreme Council for Youth and Sports, Aug. 6, 2021)

As Palestinian Media Watch has exposed for years, murderer Mughrabi is one of the primary role models in Palestinian society, heavily promoted by the Palestinian Authority (PA) — particularly to youth. Accordingly, the PA has named summer camps after Mughrabi before, as well as schools and sporting events.

These are the values that Palestinians celebrate.

The author writes for Palestinian Media Watch — where a version of this article was first published.