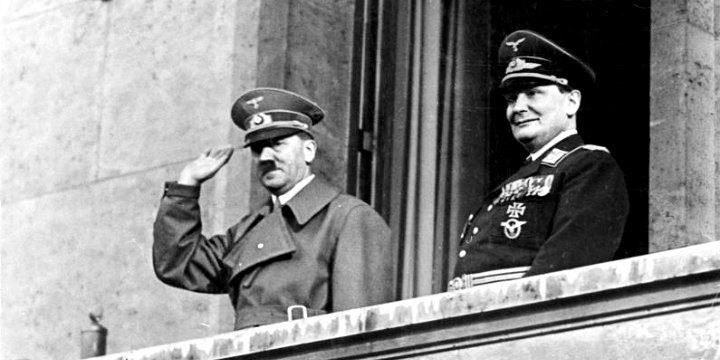 A signed portrait of Nazi leader Adolf Hitler and other Nazi memorabilia were available for purchase as part of an auction that took place in Queensland, Australia, on Wednesday.

The sale was organized by Danielle Elizabeth Auctions.

One item listed in Wednesday’s auction featured a swastika and in its attempts to explain the Nazi symbol, the auction house failed to mention its significance during World War II. The listing instead merely states: “The word swastika comes from the Sanskrit svastika, which means ‘good fortune’ or ‘well-being’ ‘lucky’ or ‘auspicious.’ To this day it is a sacred symbol in Hinduism, Jainism and Buddhism.”

According to Danielle Elizabeth’s website, the children’s book up for purchase, whose title in English translates to “Trust No Fox on his Green Heath and No Jew on his Oath,” was written in 1936 by a Nazi supporter and illustrated by a publisher of the Nazi newspaper Der Stürmer.

The book is described as “one of the most contentious pieces of propaganda in modern history and possibly the rarest and most sought-after book of WW2 … The book teaches children, according to the Nazi Party in Germany, what a Jew is and what they look like. Children’s books like [this one] were used to educate the youth of Nazi Germany in being a citizen of the Third Reich.”

Bidding has already closed for Wednesday’s auction and none of the Nazi-related items were sold.

Danielle Elizabeth Auctions was criticized last year for selling a WWII-era Nazi flag and condemned in August for holding a “sickening” auction of Third Reich memorabilia, including a Star of David armband worn by Jews during the Holocaust.

The auction house’s Managing Director Dustin Sweeny claimed that this week’s sale was “certainly not antisemitic” in a statement to The Australian Jewish News. He said, “We sell history and historical artifacts that tell a story that the world should never stop telling so history does not repeat itself.” He also claimed that he and his family received more than 100 death threats, some from the Jewish community, ahead of the controversial auction in August.

“The hypocrisy is astounding,” he added. “If the Jewish community wish to enact change they need to lobby parliament to make these items illegal, not attack an honest small business operating legally. Remember we live in a free democracy, and as much as you believe these items should not be sold, we believe they should, and everyone should respect everyone else’s right to a different opinion.”

Queensland Jewish Board of Deputies President Jason Steinberg has urged Queensland government’s to take action against future auctions of Nazi memorabilia. He told The Australian Jewish News, “We are calling on the government to ban the display of Nazi symbols and here we see this vile memorabilia again in the public domain. We know that sometimes these items are purchased to glorify Nazis and used to recruit right-wing extremists.”

He stated, “We have Holocaust survivors still living on the Gold Coast who recognize these items being auctioned for what they really are — pure hate and evil. Enough is enough. They need to be removed from sale and given to a museum to educate the next generation about the lessons of the Holocaust.”