Why Is the Palestinian Authority Hiding Its Finances From the World?

In an effort to hide its practices and prevent any external scrutiny, the Palestinian Authority (PA) has blocked access to all the financial reports it used to publish.

Since 2008, as part of an agreement to receive funding from the World Bank, the Palestinian Authority has been required to publish a range of financial documents, including its annual budget and monthly budget performance reports. While the PA temporarily honored the commitment to publish its annual budget, it has not done so since 2019. In contrast, with the exception of a few minor incidents (exposed by Palestinian Media Watch (PMW) and then rectified), the PA had been relatively meticulous in publishing its monthly budget performance reports.

Until recently (as shown below), the website of the PA Ministry of Finance provided access to all the current and previous budget performance reports. 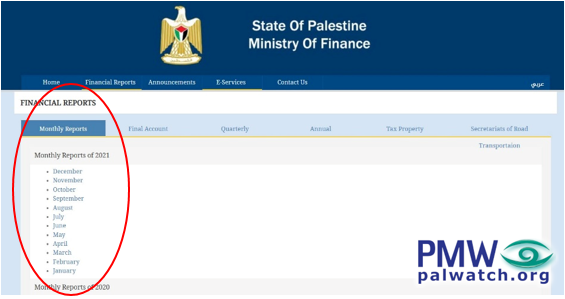 The last PA budget performance report published was for January 2022. Now, however, even this option has been blocked, and the PA is preventing any outside scrutiny.

The PA’s decision to block all access to the reports on the site of the Ministry of Finance was taken after PMW used the reports to demonstrate how the PA spent 841 million shekels in 2021 alone, paying financial rewards to imprisoned terrorists, released terrorists, wounded terrorists, and the families of dead terrorists.

Amazingly, while the PA is taking active steps to prevent any semblance of financial transparency, PA Prime Minister Muhammad Shtayyeh is holding high-level meetings with UN and other officials in preparation for the upcoming gathering of the Ad-Hoc Liaison Committee (AHLC) — an international group of donors that coordinates aid to the PA

In a series of tweets, Shtayyeh provided updates on his meetings with the United Nations Special Coordinator for the Middle East Peace Process, executives from the World Bank (that issues a status report in preparation for the AHLC meetings), and the Norwegian Minister of Foreign Affairs (Norway heads the AHLC).

The AHLC meetings are held twice a year, and serve the PA as an opportunity to request that the international community continue to ignore PA payments to terrorists, and donate ever-increasing sums to the PA budget.

In parallel, the PA government announced that it had approved the general budget for the fiscal year of 2022, with a budget deficit of $558 million:

The purpose of requiring the PA to publish financial reports was to provide public information on how the PA is spending the money (most of it from Israel and the international community) that it has in its coffers.

Indeed, these reports also helped PMW expose additional aspects of the PA payments to terrorists, and the fact that the PA has transferred hundreds of millions of shekels/dollars/euros to the PLO in recent years.

Before the international community steps in to provide assistance to the PA yet again, it should first demand that the PA abolish its terror reward policy and provide full financial transparency.