Will the EU Stand Steadfast Against PA Hate and Terrorism? While Palestinian Media Watch (PMW) has been exposing the destructive messages of the Palestinian Authority (PA)’s education system and the problematic contents of the PA schoolbooks for over two decades (see here, here, and here) — most donor countries turned a blind eye, ignoring the warnings.

As additional studies repeated and reaffirmed PMW’s conclusions, the European Union, which has been a huge donor to the PA, was the first to take a stand, conditioning its aid to the PA on curriculum reform. As a result of the EU decision, according to PA published financial reports, aid from the EU to the PA plummeted from 758,400,000 shekels in 2020 to just 97,000,000 shekels in 2021.

In June 2021, an EU commissioned report of the Georg Eckert Institute for International Textbook Research found that PA textbooks have antisemitic content; present Palestinian violence and terror against Israelis as part of a “heroic struggle”; and deny the legitimacy of Israel’s existence through maps that erase Israel and label the entire area “Palestine.”

Despite being desperate for foreign aid, the PA is quite adamant about its refusal to implement any reforms. Rather than changing the destructive content of its schoolbooks, the PA expects the EU to capitulate and continue funding the PA schoolbooks.

“We oppose having conditions placed on the European aid and want to preserve true partnership based on respect and cooperation, and not on conditions.”

PA Minister of Foreign Affairs Riyad Al-Malki made similar statements, curiously arguing that it is “unacceptable” for states who donate funds to other states or entities such as the PA, to condition those donations on the recipient performing a certain action:

“Al-Malki emphasized that Palestine [sic] completely opposes conditional funding to the public treasury. He emphasized that this is unacceptable for the states receiving aid from the EU, as placing conditions on the funding embarrasses them internationally.”

Al-Malki made the statement just days before the visit of Várhelyi, after he clarified that the halt in EU aid to the PA was a result of the demand for curriculum reform and that despite discussions between the parties, no breakthrough had been made.

PA Minister of Education Marwan Awratani adopted a common PA practice of rewriting reality, by choosing to ignore the real criticism of the content of the PA schoolbooks and attacking Israel instead.

Deflecting the EU criticism of the PA curricula, and ignoring the EU commissioned study, Awratani preferred to blame Israel for the PA’s predicament:

“The occupation state appointed an institute to check the Palestinian curriculum. It submits a report to the states supporting Palestine so they will freeze and stop their aid until everything it objects to is erased.”

Explaining that the PA would not accept conditional support for its curricula and emphasizing that the PA sees as its “right” to teach the true “Palestinian narrative” — i.e. teaching antisemitism; presenting Palestinian violence and terror against Israelis as part of a “heroic struggle”; and denying the legitimacy of Israel’s existence through maps that erase Israel and label the entire area “Palestine” — Awratani added:

“We will not allow our curricula to be dependent on anyone [but us]. It is our right to teach our children the true Palestinian narrative.”

The PA Ministry of Education made similar statements in response to the report of the Georg Eckert Institute for International Textbook Research, published in June 2021. Rejecting the criticism, the ministry said that the PA curricula was a “sovereign issue” with “a close connection to the Palestinian identity and the national narrative.” Identifying the incompatibility of the content of the PA curricula with the EU demands for reform, the ministry added that the solution was not to carry out the required changes, but rather for the PA to move to “self-funding” of its educational system:

“The [PA] Ministry of Education emphasized that the Palestinian curricula were and will remain a clear sovereign issue, as they have a close connection to the Palestinian identity and the national narrative. The ministry emphasized in a statement that the decision on any element of the curricula will remain an independent national decision, resting on the national principles … in a manner that is consistent with the international conventions and agreements.

It noted that the process of developing the curricula was based on Palestinian professional and monetary resources, as part of an effort to fortify the independence and sovereignty of the curricula in particular, and education in general. It also noted that the [PA] government has approved a program whose goal is to increase the national self-funding for education due to the increase in incitement by the Israeli lobbies, which is one of the expressions of the systematic war against the Palestinian curricula and their main content.”

The statement of the PA Ministry of Education about the need to move to “self-funding” was not new. Rather, it had already been raised when the EU freeze of aid first came into effect:

“[PA] Minister of Education Marwan Awratani emphasized that the [PA] government and Ministry of Education oppose any conditional funding by any source that targets our Palestinian curricula, which constitute a sovereign matter of the highest order.

He said that his ministry is working to find ways of national self-funding in order to build the schools.” 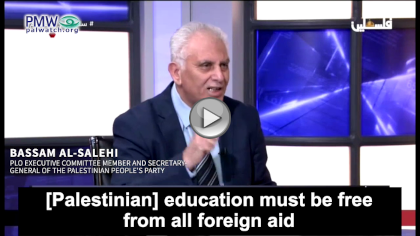 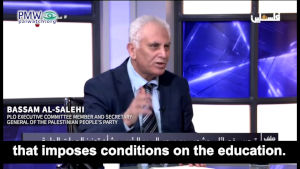 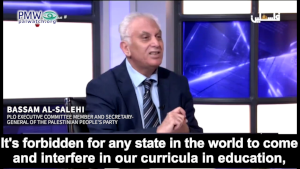 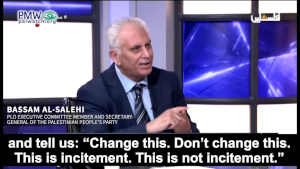 On March 31, 2022, following the PA meetings with Várhelyi, the EU Parliament’s Budgetary Control Committee adopted a resolution that would continue the freeze of EU aid to the PA:

“…deplores that problematic and hateful material in Palestinian school textbooks has still not been removed and is concerned about the continued failure to act effectively against hate speech and violence in school textbooks and especially in the newly created study cards; reiterates its position that all textbooks and materials supported by EU Funds which are used in schools must be in line with UNESCO standards of peace, tolerance, co-existence and non-violence; moreover, insists that salaries of teachers and education sector civil servants that are financed from Union funds such as PEGASE be used for drafting and teaching curricula which reflect the UNESCO standards of peace, tolerance, coexistence, and non-violence, as was decided upon by Union education ministers in Paris on 17 March 2015; and European Parliament decisions on discharge in respect of the implementation of the general budget of the European Union for the financial years 2016, 2018 and 2019; requests therefore the Commission to closely scrutinizes that the Palestinian Authority (PA) and relevant experts to modify the curriculum expeditiously.”

On April 20, the Budgetary Control Committee will conduct another hearing on the subject. In the hearing, Awratani will be expected to explain the findings of the latest report published by the IMPACT-se research organization, in which it found the following damning findings regarding the PA Ministry of Education’s Study Cards, 2021–22, for grades 1–11: