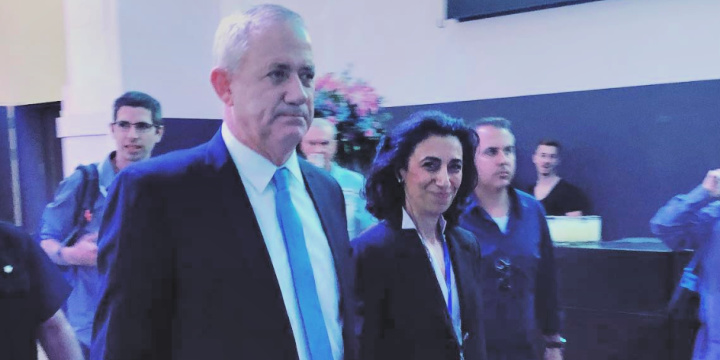 Five years after being appointed as the international affairs director of the Anti-Defamation League (ADL), Sharon Nazarian is leaving the Jewish civil rights organization confident that her work over that period has set the focus and the tone for its forthcoming interventions on antisemitism, along with other core issues facing Jewish communities on a global scale.

Hailing from a prominent Iranian-Jewish family now residing in Los Angeles, Nazarian is departing the ADL to take over as the president of the Y&S Nazarian Foundation launched by her parents, Younes and Soraya. In an extensive conversation with The Algemeiner, she noted that her work at the ADL reinforced her realization that “we don’t have the luxury of thinking only within our borders” — a sensibility she will take into her new role. Consequently, she understood that her mission at the ADL was to build an international platform for the organization “and bring our know-how to the rest of the world.”

“I feel very confident and satisfied with what we’ve achieved over the last five years,” said Nazarian. Among the examples she pointed to was the development of a digital education project on antisemitism aimed at high school students. “It enables students from all backgrounds to learn about Jewish identity and Jewish immigration,” she said. The project will be piloted in the UK in the fall and Nazarian expects that it will also be rolled out in France and other Jewish communities in Europe. “There’s interest in Chile and UNESCO as well, so it’s our first truly global educational project,” Nazarian said.

The amount of time that classroom teachers can allocate to particular subjects is increasingly squeezed, Nazarian noted, so the new program has been designed as a “light lift” for educators. “It’s a four-module project. The first module looks at Jewish identity, the second tells the Jewish immigration story — how we came to these countries,” she explained. “The third module looks at manifestations of antisemitism in the country where the students live, while the final module focuses on ‘allyship'” — how to stand up for fellow students targeted because of their identity. “The focus is on Jews, but the approach is valid for all students from minority backgrounds,” said Nazarian.

The project should not be seen as “political,” Nazarian stressed, but as a much-needed primer about Jewish life and the challenges still faced by Jewish communities. “The number one demand has concerned ignorance of Jewish identity and peoplehood,” Nazarian said. “Most people having never met a Jew or understanding what it means to be Jewish, communities around the world want a product that lays out some of the basic tenets of Jewish culture and identity, as well as antisemitism. In a lot of the surveys ADL does, for example our ‘Global 100’ of antisemitic attitudes around the world, we see time and again that the lack of knowledge about Jews that leaves a gap for stereotyping, antisemitism and hate.”

Nazarian has also been at the forefront of the ADL’s international advocacy efforts — overseeing its output during a period that witnessed a global pandemic that was exploited to the hilt by antisemitic conspiracy theorists, a renewed conflict between Israel and Hamas that sparked violent assaults on Jews in the US and around the world, and bitter political polarization in the US around a slew of racial and social issues. Nonetheless, in her mind, there is one regime that continues to stand out as the main adversary of Israel and the Jewish people more broadly.

“As far as ADL is concerned, Iran is the number one sponsor of antisemitism, Holocaust denial and terrorism. Hands down,” Nazarian asserted.

Nazarian said that if the ADL had to pick one country on which to focus its efforts, “that would be the Islamic Republic of Iran.” She cited Tehran’s ongoing nuclear ambitions, its backing for terrorist groups across the Middle East such as Hezbollah in Lebanon, and its gruesome human rights record as the basis for concern about the regime’s future behavior — including its attempt to extend its “long arm” into Europe, Africa and Latin America.

She recalled that on a visit to Jerusalem in the wake of the May 2021 conflict in Gaza, then Israeli Prime Minister Naftali Bennett had referred to an op-ed authored by the ADL that exposed “Supreme Leader” Ayatollah Ali Khamenei’s personal involvement in inciting antisemitism, remarking that a bigger push was needed on this front. Khamenei “has a specific ideological connection with the worst conspiracy theories to exist,” Nazarian argued. “We know, when a head of state has that kind of background, where it’s going to lead.”

Iran’s presence on social media platforms has led the ADL to reach out to the companies operating them, pointing to the profusion of antisemitic content that they permit, particularly in languages other than English. “It’s not enough to moderate content if it’s only in English,” Nazarian said. She added that the ADL had examined Iran’s social media output in Farsi, “to demonstrate the discrepancy.” Social media companies were “not paying attention to content in French, Arabic, Spanish, Farsi, Turkish and other languages,” she said. The ADL regularly conducts searches of core terms like “Jew” in 12 languages to determine, said Nazarian, “the proportion of the use of the word ‘Jew’ with a negative connotation, as opposed to an objective one.”

Reflecting on what she described as her “five year plan” at the organization, Nazarian emphasized that her work involved the creation of alliances with other vulnerable minorities in the Middle East. The organization’s task force on minorities in the Middle East brings together advocates from several beleaguered communities, including Baha’is from Iran, Coptic Christians from Egypt, Yazidis from Iraq and Kurds from across the region. “ADL is showing up for minority groups that are threatened and vulnerable, because it doesn’t end with Jews,” she stated.

Nazarian, whose father passed away three months ago, added that she would be taking over her family’s foundation carrying “ADL’s mission in my blood.” Nor does she entirely rule out a return in the future to Jewish advocacy. “We’ll see what the future holds,” she said.