The Palestinian Authority (PA) abuse of Palestinian children — and its process of recruiting them as child terrorists — is once again thriving in its terrorist-training summer camps.

At “the Buds of Construction and Liberation” summer camp, run by Fatah’s Central Hebron branch, hundreds of Palestinian children had individual pictures taken holding AK-47 rifles. The Fatah branch uploaded multiple photo albums of these pictures to its Facebook page. 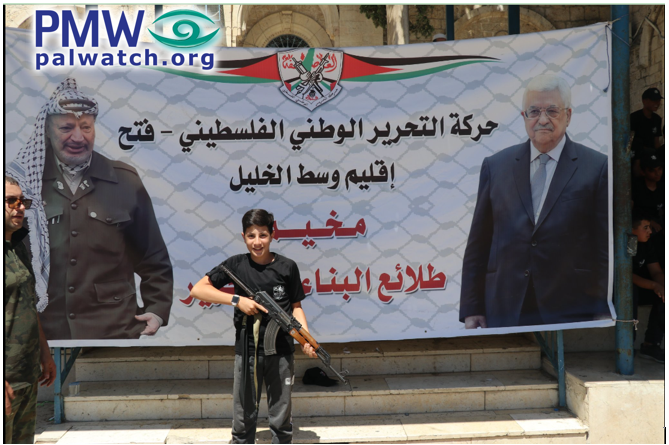 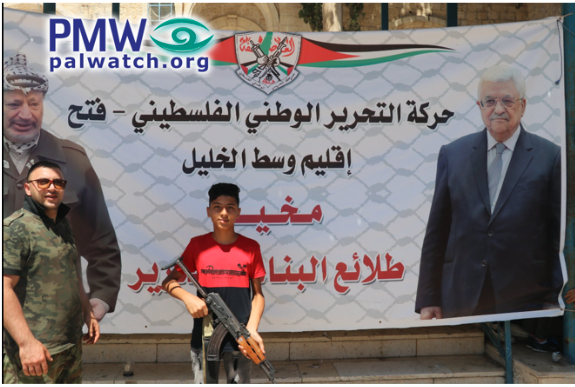 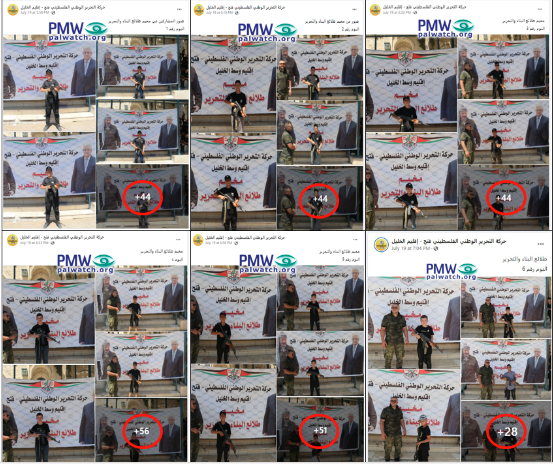 Leaving no room for misconception or doubt regarding the organizers of the event, the armed children had their pictures taken in front of a large poster with former PLO/PA/Fatah leader Yasser Arafat on the left, and current PLO/PA/Fatah leader Mahmoud Abbas on the right.

The Fatah logo, which includes a grenade, crossed rifles, and the PA map of “Palestine” that presents all of Israel together with the PA areas as “Palestine,” was placed at the top in the center.

The text on the poster and the accompanying Facebook post reads: “The Fatah Movement Central Hebron branch — The Buds of Construction and Liberation camp”

A picture showing a PA Security Forces member and a young camp participant, both posing with AK-47 rifles, also appears alongside those taken in front of the poster 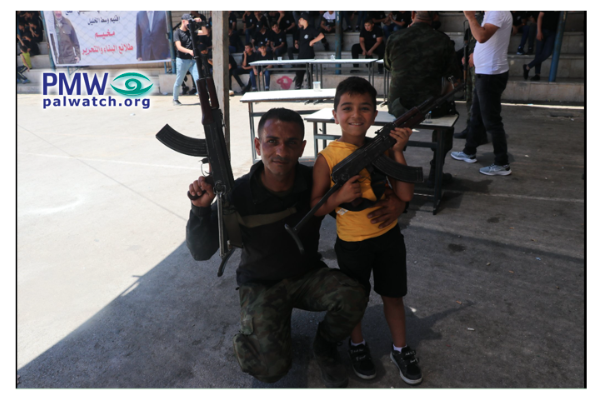 On June 23, 2022, UN Secretary-General António Guterres released his annual report on “Children and armed conflict” (CAAC). The report lists areas of conflict, the different actors relevant in those situations, and the alleged violations of the rights of children. Countries or actors found to have committed “grave violations” of the rights of children can be put on the Secretary-General’s so-called “blacklist.”

The six “grave violations,” according to UN Security Council resolution 1539 (2004), are: Killing or maiming of children; Recruitment or use of children by armed forces or armed groups; Attacks on schools or hospitals; Rape or other sexual violence against children; Abduction of children; Denial of humanitarian access to children.

Among the other situations referenced in his report, Guterres also addressed the Israel-Palestinian conflict. Regarding the number of minors killed, Guterres noted:

Based on these statistics, Guterres then threatened to add Israel to the “blacklist”:

During the May 2021 escalation of hostilities, there were substantial air strikes by the Israeli armed forces, resulting in a significant increase [in] the number of cases of violence against children. So far this year, we have not witnessed a similar number of violations. However, should the situation repeat itself in 2022, without meaningful improvement, Israel should be listed.

In other words, if terrorists from Gaza again fire thousands of rockets at Israel, indiscriminately targeting Israel’s civilian population, and Israel defends itself by targeting the terrorists and their infrastructure, and thereby incidentally injures or kills minors who are often used by the terrorists as human shields, Israel will be vilified by the UN.

In comparison, regarding the Palestinian terrorists Guterres noted:

While threatening Israel for defending itself and its citizens, and directly or even implicitly equating Israel with internationally designated Palestinian terrorist organization, Guterres failed to say a word about violations against children committed by the PLO/PA/Fatah. In doing so, Guterres and his representatives followed a repeated pattern of ignoring overwhelming public evidence.

For example, in 2020, Palestinian Media Watch (PMW) submitted an extensive report to UNICEF’s office in “Palestine.” In the report, PMW presented clear and unequivocal evidence of the PLO/PA/Fatah’s abuse and weaponization of the Palestinian children, and their recruitment of Palestinian youth to act as child terrorists and soldiers against Israel and Israelis.

Additional evidence specifically on the category of summer camps and the recruitment of Palestinian child terrorists gathered by PMW against the PLO/PA/Fatah, only to be ignored by Guterres and UNICEF, can be found, among numerous other places, here, here, here, here, here, and here.

Instead of adopting measures against the PLO/PA/Fatah, UNICEF and Guterres whitewashed the abuse, preferring to criticize Israel for the death of minors engaged in terror or their arrest and prosecution.