Members of the bereaved families arrive at the memorial service for the Munich massacre victims at Lod Airport in 1972. Photo: Eldan David/Israeli Government Press Office via Flickr.com.

Fifty years ago this week, the world was shocked when Palestinian terrorists from Fatah’s terror organization — Black September — broke into the athletes’ village at the Munich Olympics on Sept. 5, 1972, and kidnapped, and ultimately murdered, 11 Israeli athletes and coaches. The attack still remains a dark stain on the Olympics, and has settled in the collective global memory as an illustration of the horrors of terrorism.

In Palestinian ideology and memory, however, the attack is just the opposite. It is a source of pride and honor, and Palestinian Authority (PA) and Fatah leaders glorify the murderous attack and revere its planners as “heroes” and role models.

When PA and Fatah leader Mahmoud Abbas recently refused to apologize for the Munich massacre during a press conference with German Chancellor Olaf Schulz when a journalist asked him to, Palestinian Media Watch published examples and pointed out that Abbas’ reaction was not surprising at all.

Rather, it was an expected expression of PA and Fatah ideology. The PA and Fatah are proud of the Munich attack, which ranks among the top “quality operations” and most “successful” terror attacks in Palestinian history.

The following are additional PA/Fatah outpourings of praise and admiration from the last three years for the terrorists and their act of murdering the 11 Israeli athletes:

Official PA TV News, on the anniversary of the death of Salah Khalaf “Abu Iyad,” head of the Black September terror organization:

Official PA TV reporter: “The 31st anniversary of the death as a Martyr of the three Fatah leaders Salah Khalaf, Hayel Abd Al-Hamid [i.e., one of the founders of Fatah], and Fakhri Al-Omari — who gave the Palestinian revolution a large measure of sacrifice and heroism — the Insan National Action Association, the “Set Your Goal” organization, and the Fatah Movement’s Jenin branch marked the anniversary under the auspices of the Rumana village council…

These activities were carried out with the participation of official and popular bodies and included planting olive trees named after the three Martyrs.” [emphasis added]

Fatah Central Committee member Abbas Zaki: “Brother [Ali Hassan Salameh] ‘Abu Hassan’ — may Allah have mercy on him – specialized in commanding quality operations, and he had cells that he deployed in the European states. He is the one who invented letter bombs. … From this point they [Israel] started to worry about him, and he started to hunt senior officials from the Israeli Mossad … He connected himself to the Fatah Movement and became a giant despite his young age.” [emphasis added]

Official PA TV reporter: “48 years have passed since the assassination of the three commanders [i.e., Black September terror organization members] Abu Yusuf Al-Najjar, Kamal Nasser, and Kamal Adwan. … The night of April 10, 1973, has become a painful memory due to the loss of three of the most prominent leaders of the Palestinian revolution, through whose death as Martyrs the Fatah Movement and the revolution presented the most spectacular aspects of pride, glory, and loyalty … The bodies of the three righteous Martyrs disappeared from the scene of the Palestinian revolution that is continuing generation after generation to remove the occupation and take our legitimate Palestinian rights [from it], while the stories of [their] lives that emit a pleasant aroma remain present, so that they will always be the compass of preserving the national principles.” [emphasis added] 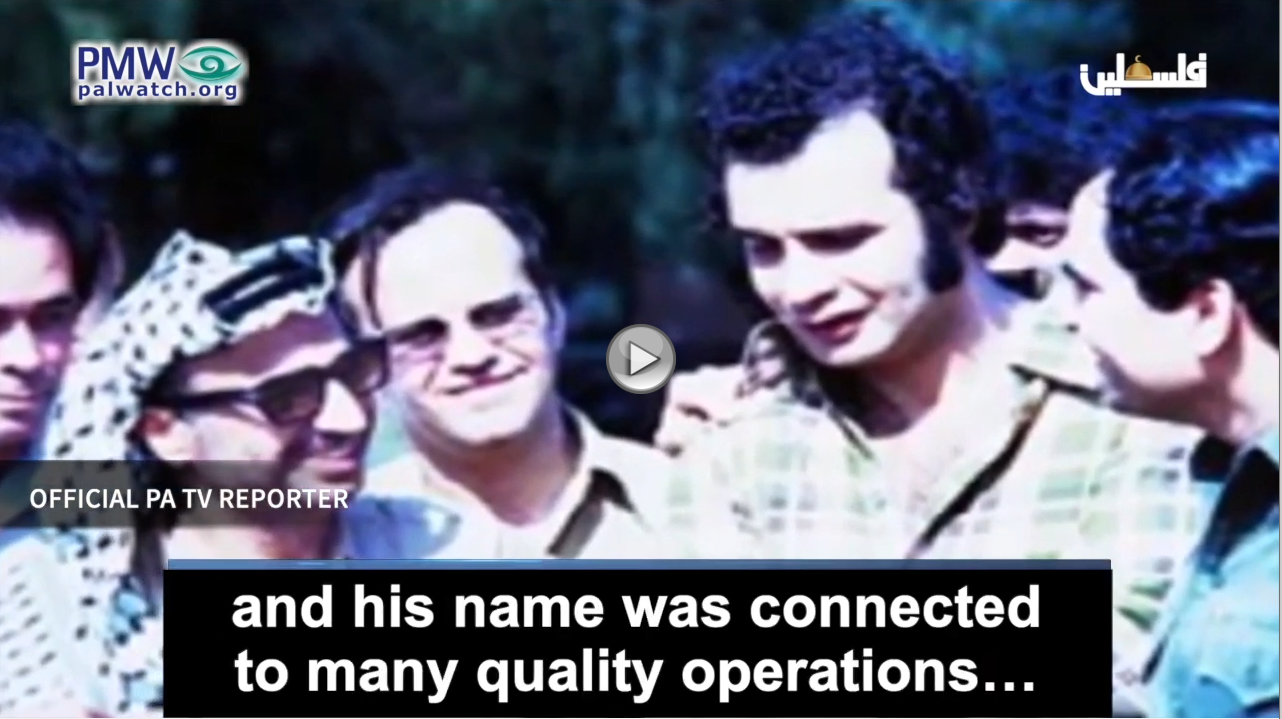 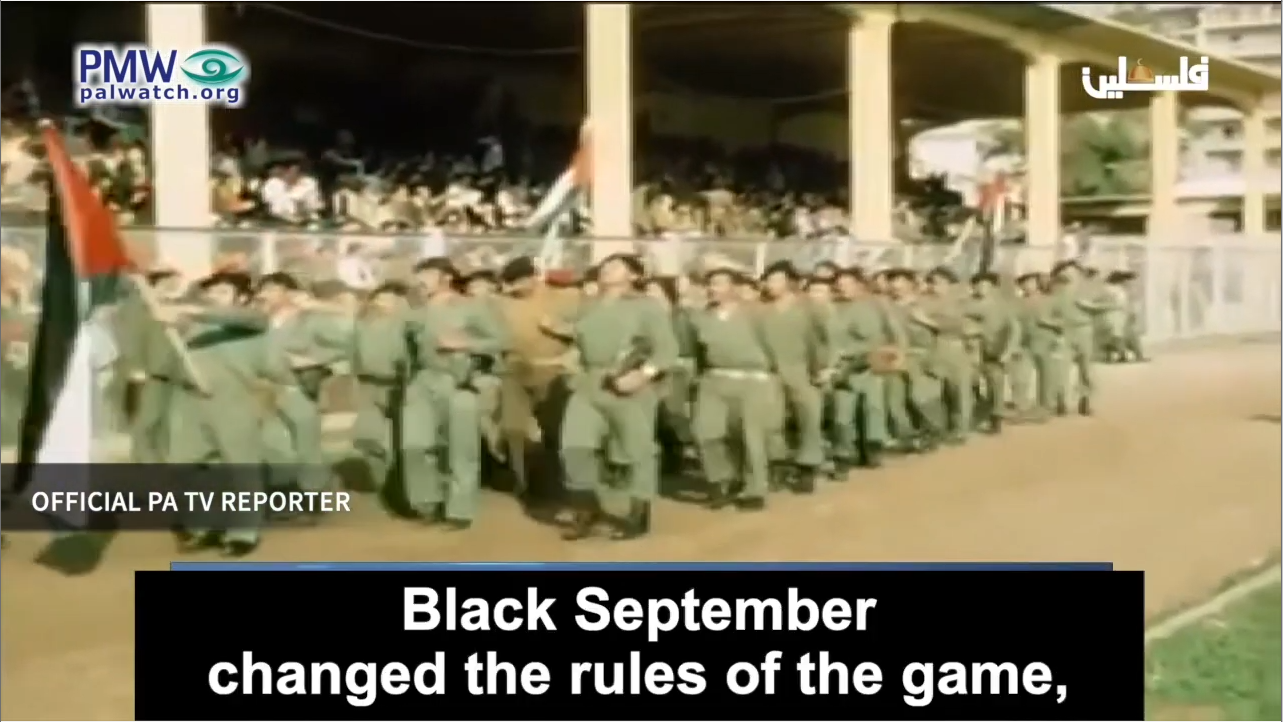 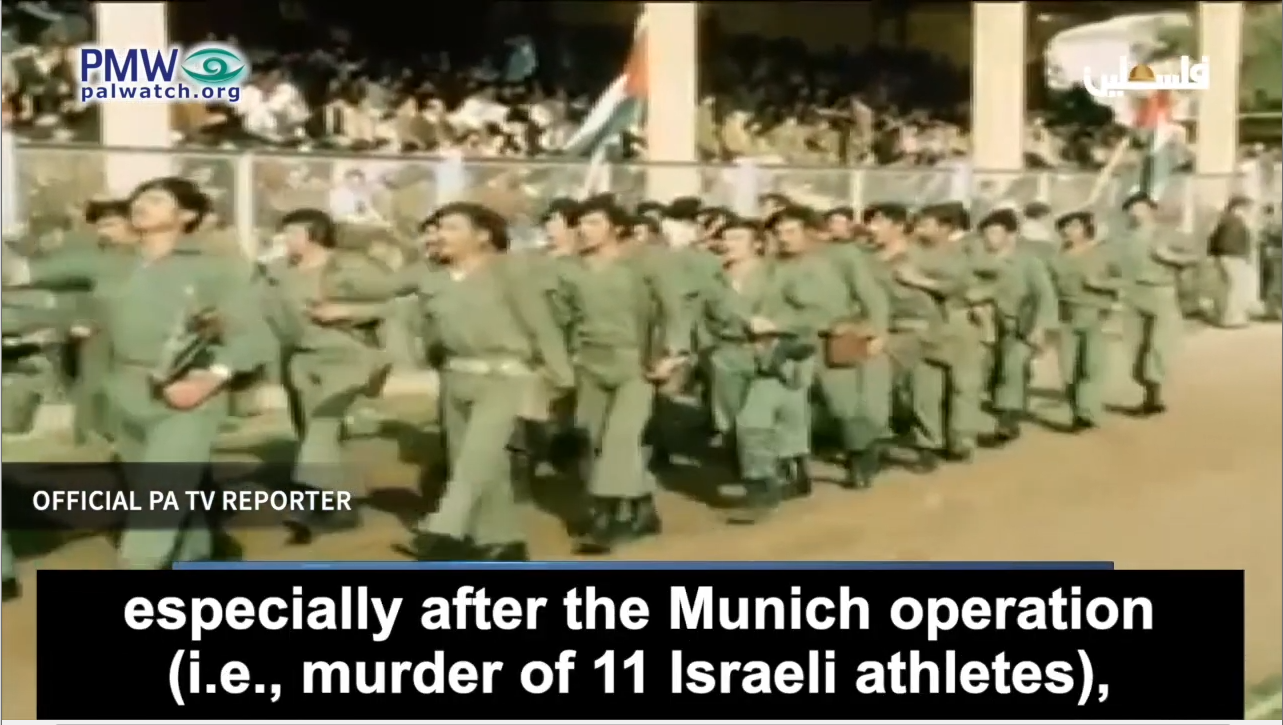 Official PA TV reporter: “[Ali Hassan Salameh] joined the Fatah Movement in Cairo… He was also given command of the special operations [i.e., terror attacks] against the occupation worldwide, and his name was connected to many quality operations … Black September changed the rules of the game, especially after the Munich operation, which Israel exploited to justify a series of assassinations against the Palestinians, including commander Ali Hassan Salameh.” [emphasis added] 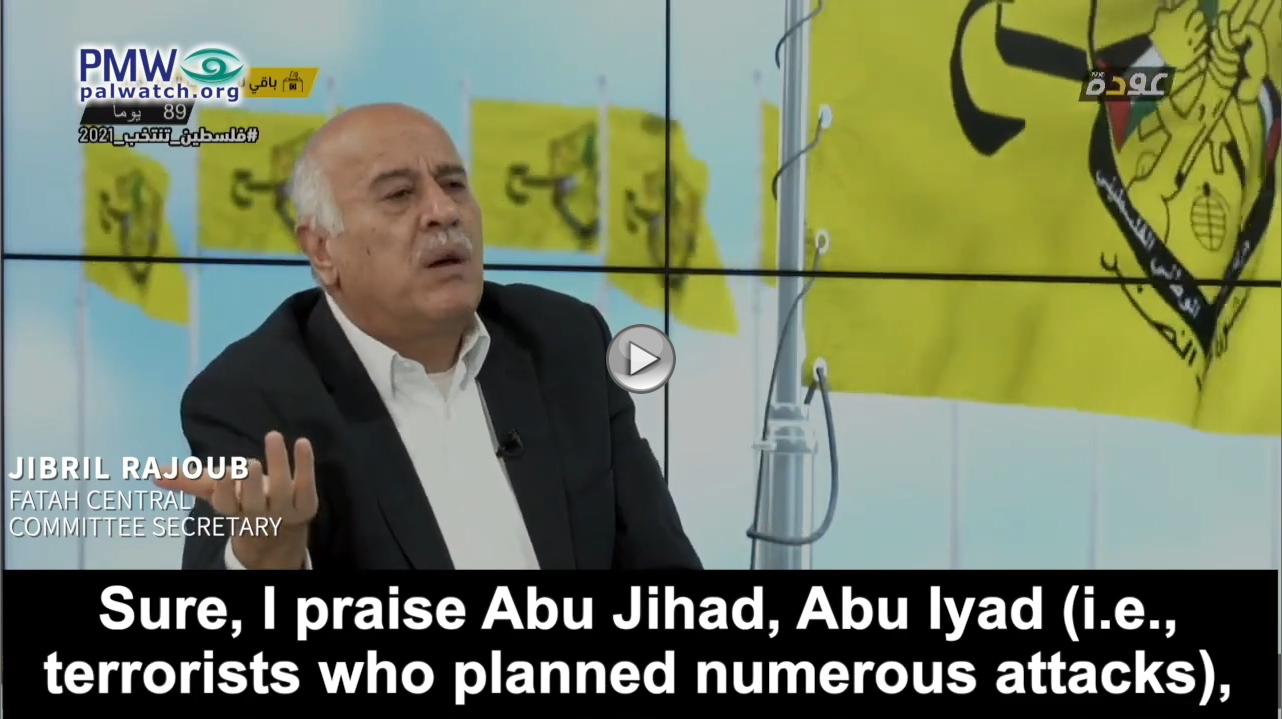 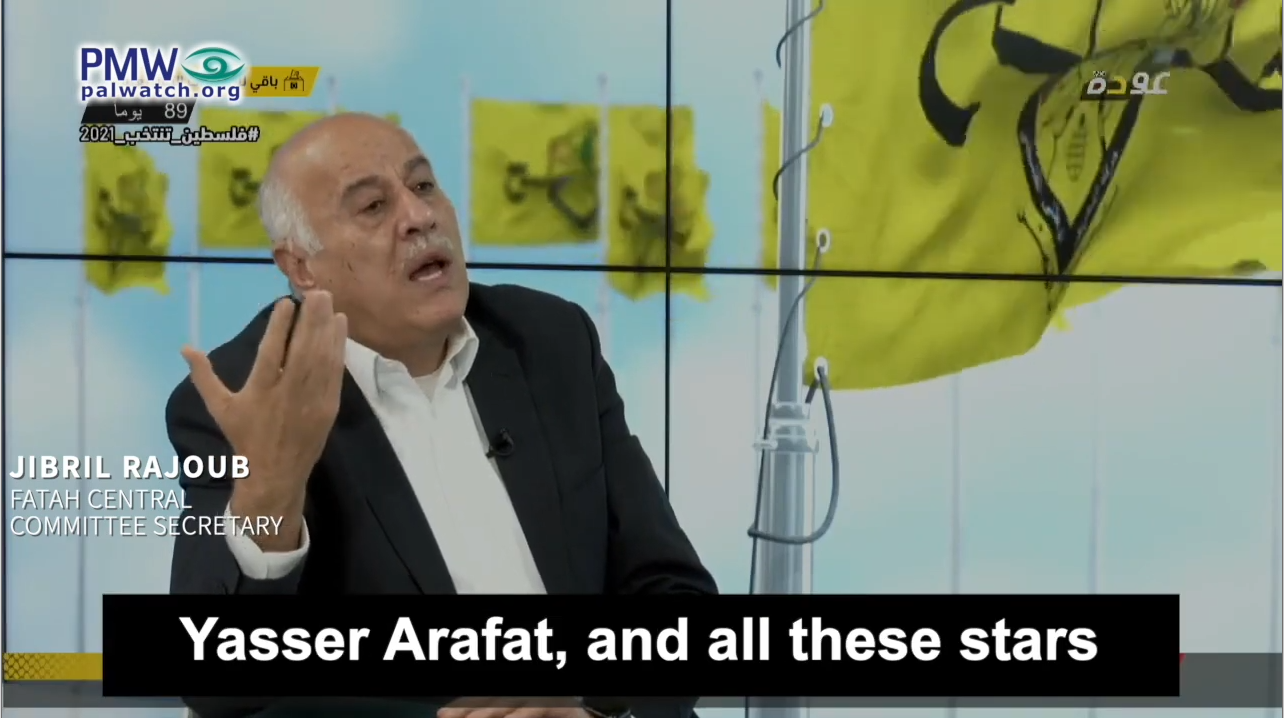 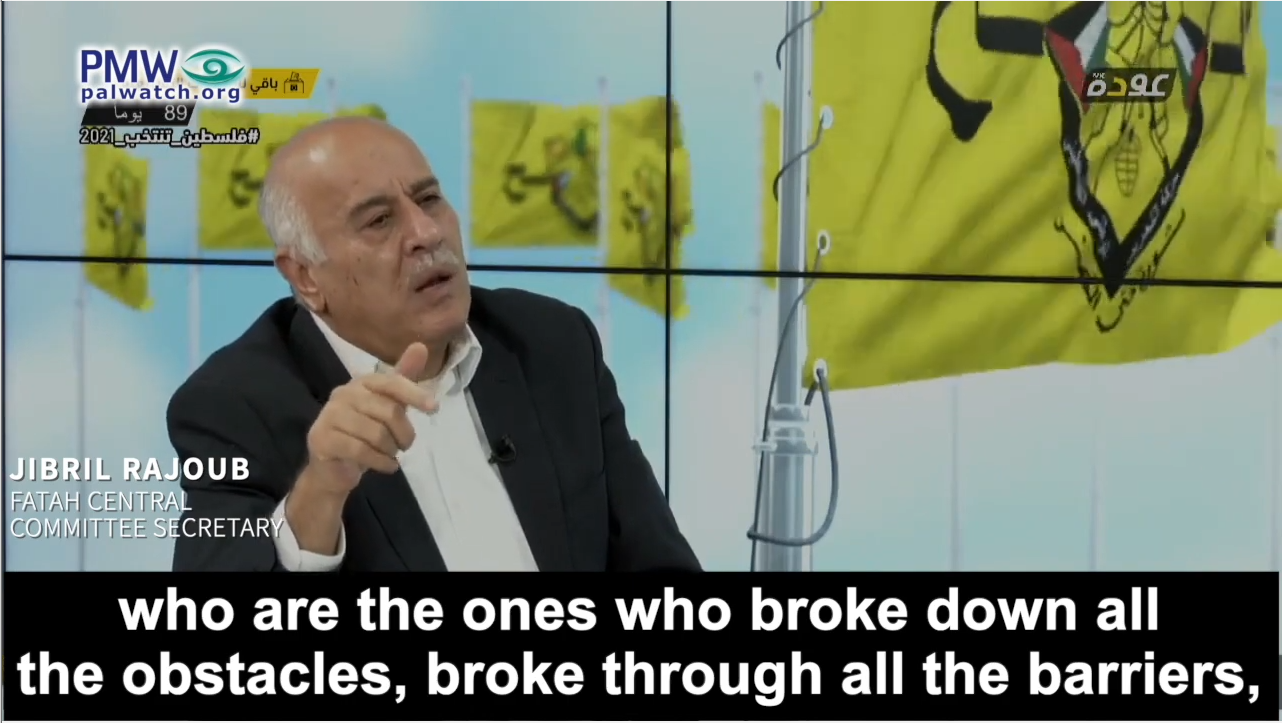 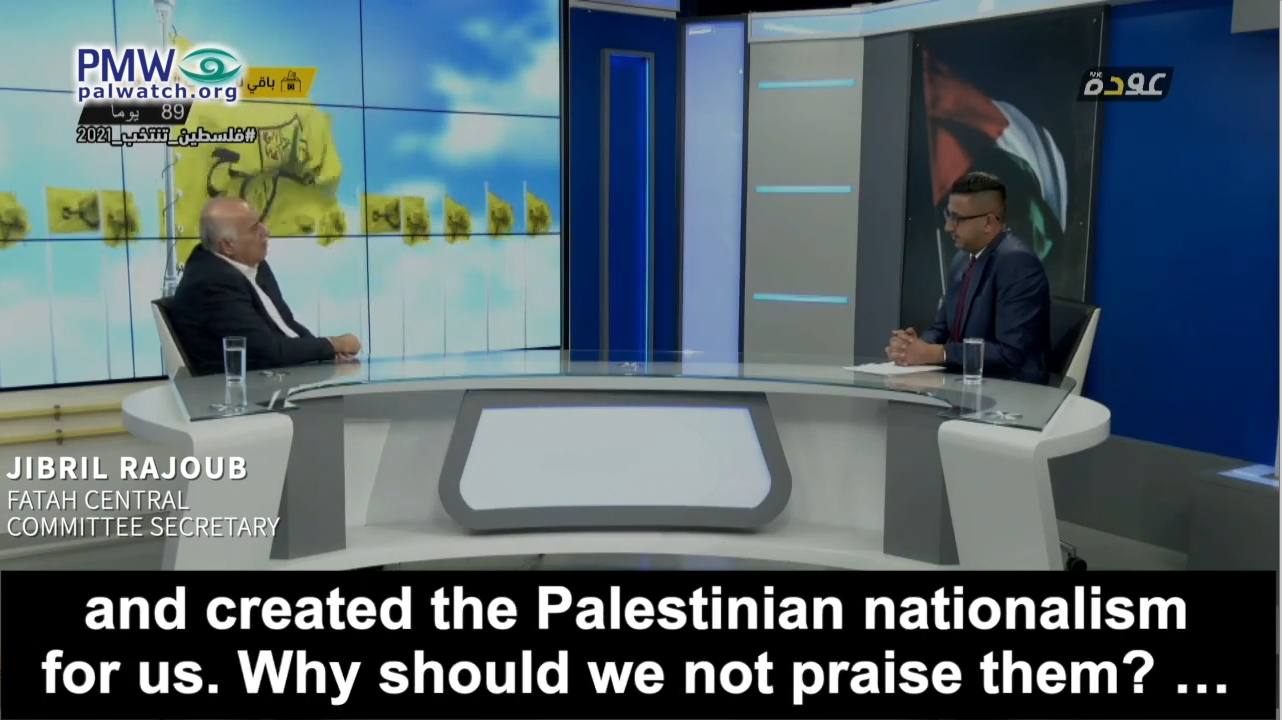 Fatah Central Committee Secretary Jibril Rajoub: “Someone said [about us]: ‘They are praising the Martyrs.’ Okay, sure! We are their followers. We are their soldiers. We were educated in their schools. … Sure, I praise Abu Jihad, Abu Iyad, Yasser Arafat, and all these stars who are the ones who broke down all the obstacles, broke through all the barriers, and created the Palestinian nationalism for us. Why should we not praise them?” [emphasis added]

The above quotes are only a few representative examples from the last three years of the PA and Fatah’s decades-long tradition of expressing esteem for the Munich Olympics massacre and its perpetrators. The next few days will show how and to what extent the PA and Fatah will be celebrating the 50-year anniversary of the lethal attack.