‘I’m Not Going to Let This Go’: Father of Antisemitic Assault Victim Vows Justice as NYPD Searches for Assailants 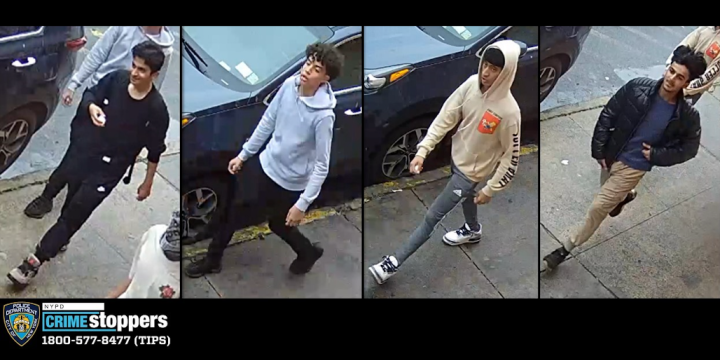 Images of suspects who egged a yeshiva student while forcing him to say “Free Palestine.” Photo: NYPD Crime Stoppers.

The father of a young New York yeshiva student who was pelted with eggs while being forced to say “Free Palestine,” on October 24 is vowing to bring the perpetrators to justice as police call on the public to help find the attackers.

“I’m not going to let this go,” Michael Einhorn said in an interview with The Algemeiner. “The reality here is the violence and the premeditated component of this. You look at that clip and the way they’re dressed up, covering their face. That’s a different level. I think that we have to face that this isn’t just an egging incident. It’s not okay and has to be stopped.”

On Wednesday, The New York City Police Department (NYPD) released surveillance footage and photographs of several suspects involved in the attack. The images show five young men, one of whom appears to be wearing a keffiyeh, walking toward Yeshiva Ohr Shraga, a Jewish school in the Midwood section of Brooklyn, with eggs in their hands. Police say the attacking gang included a total of 11 people.

The attack took place on the corner of Avenue M and East 18th St, the location of another antisemitic outrage in May, when a Yeshiva student was assaulted by five people who similarly yelled “Free Palestine.” The NYPD Hate Crimes Task Force is leading the investigation of both incidents.

Police have yet to formally identify the assailants but are eyeing eleven potential suspects, some of whom may attend the Edward R. Murrow High School (ERWHS), an institution of over 4,000 students close to the location of the attack, New York City Councilwoman Inna Vernikov said an interview with The Algemeiner.

“When things are bad, perpetrators look at Jews as an easy target,” Vernikov told The Algemeiner. “This incident is particularly disturbing and part of a series of antisemitic attacks that have become part of daily life for the Jewish community in our city and state,” she continued. “Our leadership has failed us in Albany and a lot more can be done at the city level.”

ERWHS administrators have denied that any of the alleged suspects attend the school. School officials did not respond to The Algemeiner’s request to comment.

The Algemeiner asked the New York City Police Department (NYPD) if it has arrested the assailants involved in May’s incident. A department spokesperson did not respond in time for the publication of this story.