The signing of the Oslo Accords in Washington, DC, Sept. 13, 1993. Photo: Wikimedia Commons.

Many observers have been puzzled about why the 1993 Oslo peace accords did not lead to peace, but precisely the opposite. Sporadic Palestinian terror attacks prior to 1993 were replaced by repeated Palestinian terror waves murdering more than 2,000 Israelis. My organization’s report, “Teaching Terror to Tots,” is the key to understanding the post-Oslo terror enigma.

Palestinian Media Watch (PMW) has been documenting official Palestinian Authority (PA)/Fatah ideologies, policies, and messages disseminated through every framework they control for more than 20 years. Everything that PMW has exposed has raised questions about the sincerity of the PA/Fatah in the peace process.

PMW recently published a report on Fatah’s Waed magazine for children ages 6-15, examining every issue published over the last eight years. The messages for Palestinian children spread through Waed confirm that the PA/Fatah end game was, and remains, Israel’s destruction and Israel’s replacement by “Palestine.”

The hundreds of examples in the 70 page report show that through Waed, Fatah — which has dominated and controlled the PA since its creation — has been teaching Palestinian children that: “From the River to the Sea, Palestine will be free” after “the Zionist invaders will go to the garbage can of history” because “the period of Zionism will eventually pass.”

As a last step, all “the Jewish settlers in Palestine will disappear.”

Israel must be destroyed because Jews/Israelis are: “Zionist thieves who stole our land,” “Jewish invaders,” “foreigners from all ends of the earth who did not know Palestine and did not live in it — neither them nor their forefathers.”

Since Jews have no rights, Palestinians have the “right to wage an armed struggle to take back its stolen homeland.” This is the only path for the PA/Fatah, because “the liberation of Palestine will only be achieved through armed struggle.”

In short, the PA/Fatah’s message to children is that Israel was created by theft, its continued existence is a crime, and its destruction via the armed struggle is justified and inevitable. The children who read Waed are taught that they have the responsibility to bring about the future world without Israel.

PMW’s exposure of the PA/Fatah messages through Waed should have far-reaching political implications. Attitudes towards the Oslo Accords and policy towards the PA must be reassessed based on the reality of what the PA is and not the illusion of what the international community imagined it would be. If Palestinian terror is to be stopped and stability returned to Israel, the newly exposed PA/Fatah teachings must be the impetus for a new attitude towards the PA.

PMW is releasing this report at the GPO’s Christian Media Conference in Jerusalem. To read the report, click here.

The following is an Executive Summary of “Teaching Terror to Tots”:

Fatah, the ruling political movement of the Palestinian Authority (PA), runs a youth movement for Palestinian children ages 6-15 called the Lion Cubs (boys) and Flowers (girls) which publishes a children’s magazine called Waed(Arabic for “Promise”). The magazine is published on the youth movement’s website and distributed at Fatah and PA activities and in PA schools.

Waed’s fundamental messages are that Israelis are foreign colonialist invaders, and therefore, Israel has no right to exist. Palestinians led by Fatah will continue the heroic armed struggle until the invaders are defeated and will leave. There is no hint of Israel’s legitimacy, nor is there a possibility that Israel will coexist alongside a liberated Palestine, whose borders will include all of Israel.

Fatah’s rewriting of the past generates its vision for the future. A fictitious 5,000-year-old “Canaanite Palestinian Arab” people is invented as the pretext for all Palestinian rights: “Since the third millennium BCE, in other words, 5,000 years ago. Its Palestinian residents settled it” (Waed, Issue 37, p. 22). The erasure of the authentic Jewish history in the land is the pretext for denying Jews any rights. Israelis are branded as “foreigners who came from all ends of the earth, foreigners who did not know Palestine and did not live in it — neither them nor their fathers and forefathers” (Waed, Issue 36, p. 2). Every city in Israel and every centimeter of Israel are said to be parts of the occupied Palestinian “stolen homeland.”

Accordingly, Israel is delegitimized as the “thieving entity” and Israelis are demonized as the “Jewish invaders” and “Zionist invaders.” Fatah proclaims it will destroy Israel by “liberating Palestine from the thieving Zionist entity” (Waed, Issue 32, p. 3). Israel’s destruction is packaged in various euphemisms such as: “the period of Zionism will eventually pass,” and“there is no invader who… did not leave it [Palestine] defeated.”(Waed, Issue 27, p. 23).

This inevitable “liberation of Palestine,” will be nothing less than Palestinian “victims” achieving justice, since Palestinians have the “absolute right to take back its rights in full” (Waed, Issue 26,p. 12).

Waed is emphatic that Fatah’s goal is to end Israel’s existence and not merely Israel’s control over the West Bank. The references to “Palestine,” “stolen homeland” and “occupation” always include all the State of Israel. So do all the maps of “Palestine.” 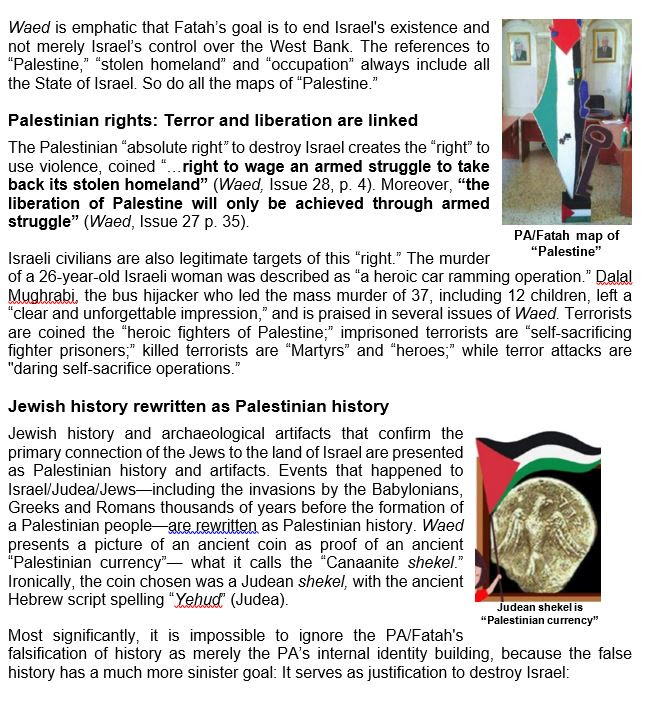 In addition to delegitimizing Israel the state, the PA/Fatah demonizes Israelis as individuals, calling them evil, racist, bloodthirsty killers, through expressions like the “giant Israeli murder machine,” “Zionist gangs”and “the blood of Gaza’s children did not quench the thirst of the Israeli monster.” Among the many libels it disseminates,the magazine accuses Israel of Nazi-like horrors.

For the PA/Fatah, this fabricated history is what creates the vision for the Palestinian destiny. The Waed message: Israel was created by theft, its continued existence is a crime, and its termination via the armed struggle is justified and inevitable. The education transmitted to children via Waed will be the driving force for Palestinian hate and terror for another generation.