Anti-Peace Alliance Rallies Against Emirati-Israeli Accord

The national flags of the United Arab Emirates and Israel flutter along a highway, following the agreement to formalize ties between the two countries, in Netanya, Israel, Aug. 17, 2020. Photo: Reuters / Nir Elias.

In a historic agreement, the United Arab Emirates (UAE) and Israel have announced that they will normalize relations.

As a result, Israel and the UAE are establishing diplomatic ties, and Israel announced that it is suspending plans to annex parts of the West Bank. Other Arab and Muslim-majority states are rumored to be in talks with Israel over similar peace deals.

The agreement is the first between Israel and an Arab Gulf state. The UAE becomes only the third Arab state to sign a peace agreement with Israel, following Egypt in 1979 and Jordan in 1994.

Abbas said that “Palestine speaks in its own name. She is who will say ‘yes’ or ‘no.'”

Mohamed Hussein, the grand mufti of Jerusalem’s Al-Aqsa Mosque, issued a fatwa banning Emiratis from praying at the mosque. But Egypt’s Al Azhar, so influential in the Sunni world that it sometimes is called “Islam’s Vatican,” rejected the fatwa as “biased” and unenforceable.

Egypt’s Muslim Brotherhood, on the other hand, cast the UAE-Israeli agreement as “treachery.”

“The Muslim Brotherhood condemns the UAE’s decision to establish integrated relations with the Zionist entity,” a statement from the group said, “as well as the ongoing efforts to bring more Arab regimes into the sinister swamp of normalization.”

Palestinian-Emirati relations had soured before the peace deal with Israel. The PA rejected an Emirati aid convoy in May, complaining that the shipment came through an Israeli airport and had not been coordinated directly with the Palestinians. The United Arab Emirates has donated over $2.1 billion to the Palestinians since the PA’s 1994 establishment as part of the Oslo Accords. That makes the UAE the PA’s fourth-largest donor.

Reactions in the Middle East are mixed. “I have followed with great interest and appreciation the tripartite joint statement between the United States of America, the United Arab Emirates and Israel regarding the agreement to stop Israel’s annexation of the Palestinian territories and to take steps that would bring peace to the Middle East,” Egyptian President Abdel Fattah el-Sisi wrote on his official Facebook page. Later, Sisi lauded the agreement and congratulated UAE Crown Prince Sheikh Mohammed bin Zayed Al-Nahyan, reportedly saying it will “open horizons for stability in the Middle East.”

On the other hand, Iranian President Hassan Rouhani described the peace treaty and normalization with Israel as a “great mistake” that gives Israel a “foothold in the region.”

“They [the UAE] better be mindful,” Rouhani said. “They have committed a huge mistake, a treacherous act. We hope they will realize this and abandon this wrong path.”

The UAE Foreign Ministry responded by summoning Iran’s chargé d’affaires in Abu Dhabi to call Rouhani’s speech “unacceptable and inflammatory, [with] serious implications for security and stability in the Gulf region.”

The great irony is that, in 1949, Turkey was the first Muslim majority country to recognize the State of Israel. The two countries maintained strong military and economic cooperation throughout the years. Turkish state media expects some of these economic ties to strengthen as a result of the COVID-19 pandemic.

But those ties were forged when Turkey had secular governance. Now, under Islamist control, Turkey’s parliament joined Iran in condemning the UAE-Israel peace deal.

In the United States, some liberal politicians reacted oddly to the treaty. For example, Ben Rhodes, the former deputy national security adviser to President Barack Obama, minimized the deal as “an election eve achievement from two leaders who want Trump to win” reelection. But many other liberals praised the deal.

US Rep. Rashida Tlaib (D-MI), whose parents are Palestinian, dismissed the peace treaty as an empty political gesture that will “normalize” Palestinian suffering. “We won’t be fooled by another Trump/Netanyahu deal,” she tweeted. “We won’t celebrate Netanyahu for not stealing land he already controls in exchange for a sweetheart business deal. The heart of the issue has never been planned, formal annexation, but ongoing, devastating apartheid.” 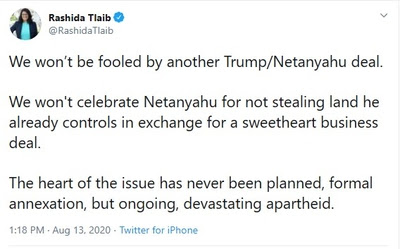 Lamis Deek, a former Council on American-Islamic Relations (CAIR) New York board member, said that, by making peace with Israel, the UAE gave “public approval to genocide Palestinians and to kill any resistance to US-Israeli hegemony in the region.” 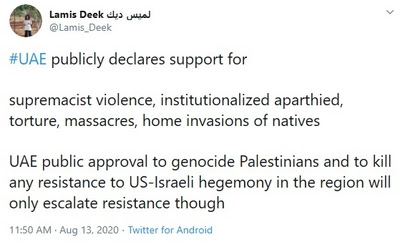 Qatari-owned Al Jazeera quoted Iran’s Deputy Speaker of the Parliament, Ali Mothari, saying the UAE agreement “does not maintain peace, but rather serves Israel’s crimes. The UAE is making a mistake by normalizing … with Israel, and it will receive bad repercussions.”

Meanwhile, the first fruits of the peace treaty emerged just days after its announcement. The Emirati Apex National Investment company signed a “strategic commercial agreement” with Israel’s Tera Group to conduct research on the COVID-19 virus and develop a testing device. A surge in tourism and business relations between the two countries is expected to follow.

“We find all major [world] capitals and prominent international figures have lauded the treaty and blessed it as they valued this strategic transformation,” wrote Emirati Minister of State for Foreign Affairs Anwar Gargash. “But the losers out of this transformation are the brokers and peddlers of political causes.”

The historic peace between the UAE and Israel may help reopen the doors to a sustainable peace in the Middle East. Countries such as Bahrain, Oman, and possibly Sudan are open to the idea of normalization of relations with Israel. The deal, however, has exposed the disingenuous nature of the anti-peace Islamist camp. Their reactions show they care much less about attaining peace or the fate of Palestinians than about imposing their agenda and settling political scores.