Antisemitism on Two Wheels — and in the Strangest of Places

Palestinians burn tires to throw over the Gaza border into Israel on May 4, 2018, as part of weekly riots led by Hamas since March 30. Photo: Wikimedia Commons.

The thing about the antisemitism ‘whack-a-mole’ game is that you can never be sure where the next anti-Israel propagandist will pop up. I mean — who would think of checking one of the UK’s oldest and biggest cycling magazines, Cycling Weekly, for lies about Israel? But as it turns out, one of their writers has a hard-core anti-Israel fetish.

Cycling Weekly’s latest edition carried a story titled “Dreaming Beyond the Barricades.” It was all about a Gazan cyclist who had been shot and had lost his leg during the March of Return protests. It was an article designed to break your heart and make you pick up a Palestinian flag in protest at those awful inhumane Israelis — a tick-box exercise in propaganda, repackaged as a human tragedy.

There are several parts to this piece; there is the journalist, the article, and the cyclist’s story. Read on to see how raw anti-Israel propaganda climbed into the saddle and took every Cycling Weekly reader for a lightning-fast, antisemitic spin.

First, the journalist is Julian Sayarer, a cyclist, who for a while held the “round the world cycling” record. He wrote a book about the attempt, called Life Cycles. Sayarer is half-Turkish, and he describes being brought up with “mostly Muslim cultural influences.” He obviously caught the “Free Palestine” bug, and his most recent book is called Fifty Miles Wide: Cycling through Israel & Palestine.

His Twitter timeline is full of tweets about Jews, Israel, Palestinians, and antisemitism. Here are just four I wish to highlight:

The first example — the tweet about the Board of Deputies — is more than problematic. It is all about Jewish influence in politics. Sayarer has also tweeted out about Israel politicizing Jewish students — in a thread in which he appears to come out in defense of David Miller, Bristol’s antisemitic academic. Sayarer’s objections and deflections in that thread were soon dealt with — and he fled the scene.

The other three examples deal with the core of the matter — Sayarer’s gullibility — a fatal characteristic for someone attempting to write something on the Mideast conflict. Sayarer appears to believe everything he is told.

He says there was an “extended Pogrom.” There was no pogrom. There was a violent Jewish reaction to Arab violence against Jews which the Israeli police worked hard to contain. Ignoring the violence which led to the unrest — as Sayarer does, all in order to disgracefully label it a “pogrom” — is highly offensive to Jews.

Then Sayarer blames anti-gay measures in Gaza in 2019 on British rule that ended in 1948. Can this get any more absurd?

The idea that the reason gay people in Gaza suffer homophobia is rooted in the British Mandate is beyond desperation. The Jews were under exactly the same administration before 1948 and yet went on to create a gay-friendly oasis.

One last example to show how gullible Sayarer is. The post on the left is from Sayarer talking about his Kaffiyeh. He tells the story of the last remaining Kaffiyeh factory and how it failed because Israel restricts the “import of ink.” The post on the right is from the website of the Hirbawi factory itself. It explains that it was the opening of markets “because of peace talks” that ruined trade. If Sayarer had even bothered to look at the Hirbawi website before spreading this propaganda — he would have also have seen that sales are now increasing. 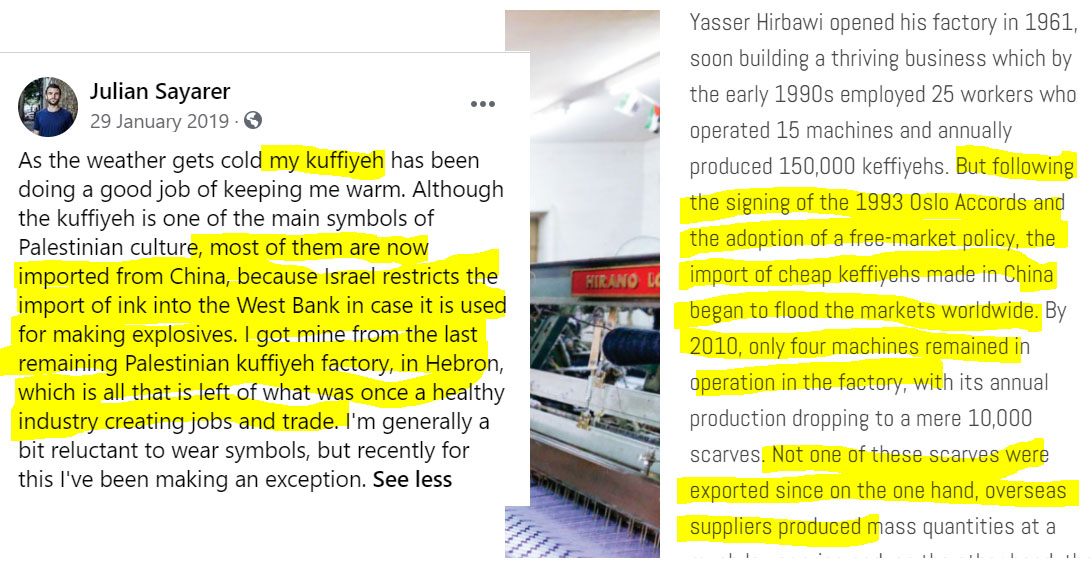 The Cycling Weekly article itself contains several blatantly unacceptable errors. For a start, Sayarer writes that “hundreds of thousands of Palestinian Arabs were expelled from their homes by Israeli forces.” 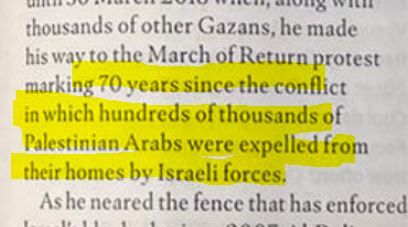 Well, that never happened. Most Palestinians voluntarily fled as families always do in civil conflict.

Then the reader is told that the March of Return protest was going to be a peaceful one:

Peaceful? Sayarer clearly misunderstands Hamas and Islamic Jihad. They explicitly sent their operatives into the crowds to make sure they wouldn’t be peaceful. There was nothing peaceful about these protests — even if some of the participants never wanted to engage in violence.

The entire article is a one-sided narrative that ignores all context. The fact Israel left Gaza — dismantled settlements — and was rewarded with Hamas terrorism and rockets — which is why the fence is in place — is never mentioned.

We cannot even know whether the subject of the article, Alaa al-Dali, was involved in violence nor what he was doing so close to the border fence. As you will see, al-Dali is far from being a reliable witness.

There is no argument that the story could have been both powerful and honest. Alaa al-Dali is factually back on a bike. It is a story about perseverance in the face of adversity and human strength. I wish him well, and I hope that he continues to chase his dreams.

But instead of positive messaging, the article is built around demonizing Israel. It is all about occupation, cruelty, and resistance. It is also chock full of lies.

Did Sayarer or Cycling Weekly check any of this? I had my suspicions, so I went for an online stroll.

As far as I can tell, the entire story is utter bunk. Alaa al-Dali was a cyclist but was not the best in Gaza. His name does not appear anywhere in English *before* the shooting incident — which would be odd for a cycling champion. His Facebook profile appears to have been created only after the incident too — so maybe something needed to be hidden. When I searched for “Alaa Al Dali” in Arabic, I ran into similar difficulties.

There is no sign of any 2018 Palestinian National Championship in Gaza. There is not a single image of him winning gold anywhere. All the photos circulating of him with a prize are from when he came third at a local United Nations-Japan sponsored event — the Tokyo Championship in mid-2017. At another event in April 2017, he did not make the podium. That April competition was sponsored by the radical Islamist terror group Islamic Jihad. Not one of the cyclists/coaches/journalists tagged in images of these events posted anything about a 2018 national competition in Gaza (examples 1,2,3,4,)

The PMSMF (the Palestinian federation responsible for cycling competition), does not appear to have mentioned him when he was shot. They do mention an event in March 2018, in Ramallah, but Alaa al-Dali does not seem to have competed.

Did the author bother to check anything?

As for the Paralympics? The last one to take place was in 2016 and because of the coronavirus pandemic, the next is not happening until late 2021 at the earliest. Which Paralympics did the Israelis stop him from attending?

My guess? The story is total fabrication. “Pallywood” took a cyclist who suffered a tragedy and appropriated his disability to turn him into a former Palestinian champion for propaganda use.

There is no excusing this. It is the worst type of propaganda. Alaa Al Dali has clearly suffered an awful injury. The article hides behind that injury to promote lies and a demonize Israel narrative. The injury makes confronting the story uncomfortable to challenge — but these lies have to be faced down. Cycling Weekly should retract the article and apologize.

David Collier has been writing about Israel for 18 years, and blogs from Beyond the Great Divide.