After a day of fasting during the month of Ramadan, Muslims around the world enjoy a fast-breaking meal called an “iftar.” For the Palestinian Authority (PA), even this festive meal has been just another opportunity to glorify terror and declare its devotion to its terrorist prisoners.

One such event was the visit of none less than the PA prime minister, Muhammad Shtayyeh, and Ramallah District Governor Laila Ghannam with terror mother Latifa Abu Hmeid — who is the mother of six murderers (five are serving life sentences, and one was killed during an attempted arrest). 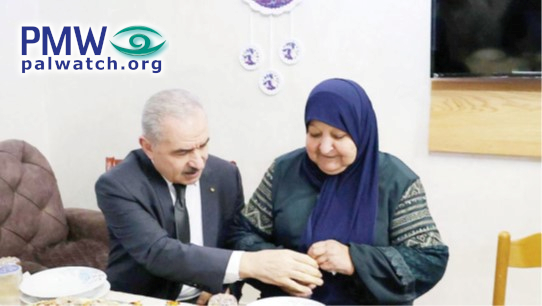 “Yesterday Prime Minister Muhammad Shtayyeh participated in the [Ramadan] fast-breaking meal with female fighter Um Nasser Abu Hmeid [i.e., mother of terrorists responsible for at least 10 murders] at her home in Ramallah, in the presence of Ramallah and El-Bireh District Governor Laila Ghannam…

The prime minister conveyed the blessings of [PA] President Mahmoud Abbas to Um Nasser. He again emphasized that the prisoners’ cause and making every effort to release them all from the occupation’s prisons will remain at the top of the priorities of the [PA] leadership and government.

Shtayyeh saluted Um Nasser for her resolve and her awe-inspiring standing as a mother who represents all the mothers of the prisoners, as she is defending our prisoners in the occupation’s prison and waving their flag in our consciousness and in our hearts.”

Just days previously, official PA TV showed footage of Abu Hmeid waiting to break the fast, with pictures of her sons — the imprisoned terrorist murderers — stuck to the chairs around the table: 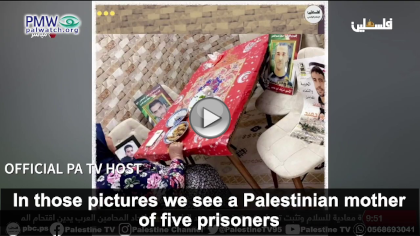 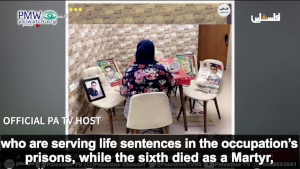 Terrorist prisoner Nasser Abu Hmeid is one of Latifa Abu Hmeid’s sons, and is in critical condition suffering with advanced stage cancer. He was convicted for his role in the murder of seven Israelis, and is serving seven life sentences. As Palestinian Media Watch has already noted, the PA is doing its utmost to use Nasser Abu Hmeid’s inevitable death as an excuse to incite more terror.

Since Abu Hmeid has at least three other children, in addition to the five imprisoned terrorist murderers, it is clear that her sitting alone at the table was nothing more than a media stunt.

Nonetheless, shortly after the stunt, presenters on PA TV discussed the images, declaring that Abu Hmeid is a “school of sacrifice, self-sacrifice, loyalty, and endurance too”: