People take a knee during a Black Lives Matter rally, as protests continue over the death in Minneapolis police custody of George Floyd, outside the US Capitol in Washington, DC, June 3, 2020. Photo: Reuters / Jonathan Ernst.

The American linguist and political commentator John McWhorter coined the term “Woke Racism” to refer to the latest wave of elite, radical, “anti-racist” campaigners who posit that racism is so deeply embedded in the fabric of American life that it’s impervious to traditional civil rights and anti-racist legislation.

According to these radicals, in order to level the playing field, liberal democratic systems of government — which aren’t up to the Utopian task of achieving perfect racial parity — must be radically re-constituted to allow for what Ibram X. Kendi, author of “How To Be An Anti-Racist,” refers to un-ironically as “anti-racist discrimination” against groups who are “disproportionately successful.”

The only thing that matters to such campaigners is the racial disparity in economic and social outcomes, which is viewed as sufficient evidence to demonstrate racism. Not only are all other possible factors for unequal results ignored, but it’s considered racist to even consider other explanations.

Thus, “privileged” whites and those labeled as “white adjacent” must accept a future where they will face “progressive bigotry” until there’s complete racial parity — as measured only by outcomes — in all areas of life.

Though the proponents of this Woke Racism typically focus only on the Black-white paradigm, the question of where Jews (and other successful, yet historically disadvantaged, minorities) stand within this racial binary is rarely prominent within the public discourse.

In a chapter in his masterful and urgent book, “Woke Antisemitism: How a Progressive Ideology Harms Jews,” David L. Bernstein recounts a story about a Jewish friend who grew up poor, lost his father as a young child, was the target of antisemitic abuse in school, and struggled with dyslexia. However, after working his way through college, he managed to earn his MBA and land a job at a major consulting firm, where he worked diligently and received several promotions.

After the murder of George Floyd, his company decided to make staff changes, in order to advance the values of “equity and inclusion” (DEI). One of the changes involved the CEO’s decision to lay off over-represented, white staff and to hire more people from “marginalized” communities.

One of the employees fired as the result of this racial restructuring was David’s friend, who, despite his under-privileged background, had become — in the eyes of the dominant DEI orthodoxy — a privileged white man. As Bernstein observes, “taken to its logical conclusion, the Woke ideologue’s approach to equity” will, in the workplace, university, and elsewhere, inevitably have this kind of impact on Jews.

The problem with “Woke” orthodoxy, as Bernstein explains in his thorough analysis — which includes his first-hand experience as a Jewish communal leader dealing with the Woke movement’s growing acceptance by Jewish day schools and organizations, and his work as director of the Jewish Institute for Liberal Values (JILV) — is that this racial essentialism reduces people only to oppressed people of color and privileged white oppressors.

Within this Manichean framing, Jews, despite being n historically oppressed minority and framed as non-white, or even enemies of the the “white race,” by neo-Nazis and other far-right antisemites, are typically categorized as “white” or “white adjacent” by Woke activists.

The Woke movement wants Jews to acknowledge their privilege and their contribution to white supremacy, and become “white allies” for the truly oppressed racial minorities. As Bernstein writes: “If someone is kept down because of white supremacy, someone else must have been propped up by it.” It follows, he adds, that “Jews will be seen as profiting at the expense of Black people.” Merit, in the eyes of the Woke left, is an illusion designed to legitimize the racist system.

This Oppressor v. Oppressed racial paradigm, which equates power with depravity and powerlessness with virtue, Bernstein writes, is also increasingly the default orientation by which the Woke left sees the Israeli-Palestinian conflict. Through this bifurcated lens, he writes, “Israelis are the perennial victimizes, with no room for nuance of any kind” — a rigid framing by which many media outlets cover the events in the region.

Another frightening element of the new Woke ideology that’s been adopted by many Jewish communal leaders, Bernstein observes, is the refusal to examine Woke ideology with any scrutiny. Jewish programs that accept Woke ideology refuse to believe that it is up for debate, and instead treat it as received wisdom.

Bernstein is rightfully incredulous that more Jews and Jewish leaders aren’t suspicious of such a dogmatic approach, especially in light of the fact that passionate debate is so central to Jewish life and tradition.

Still, perhaps the most shocking fact presented in “Woke Antisemitism” is the result of a poll commissioned by JILV, which demonstrates how the new Woke views on race, racism, and Jews have penetrated the public consciousness. The poll, which included roughly equal numbers of Democrats and Republicans, asked the following question:

Do you agree or disagree with the following statement?

“America is a structurally racist country in which white Americans, and white adjacent groups who emulate white culture (like Asian Americans and Jewish Americans), have unfair advantages over which must be addressed to achieve equity.”

The results showed that a plurality of all respondents agreed with the statement, including an overwhelming majority of self-described progressives. 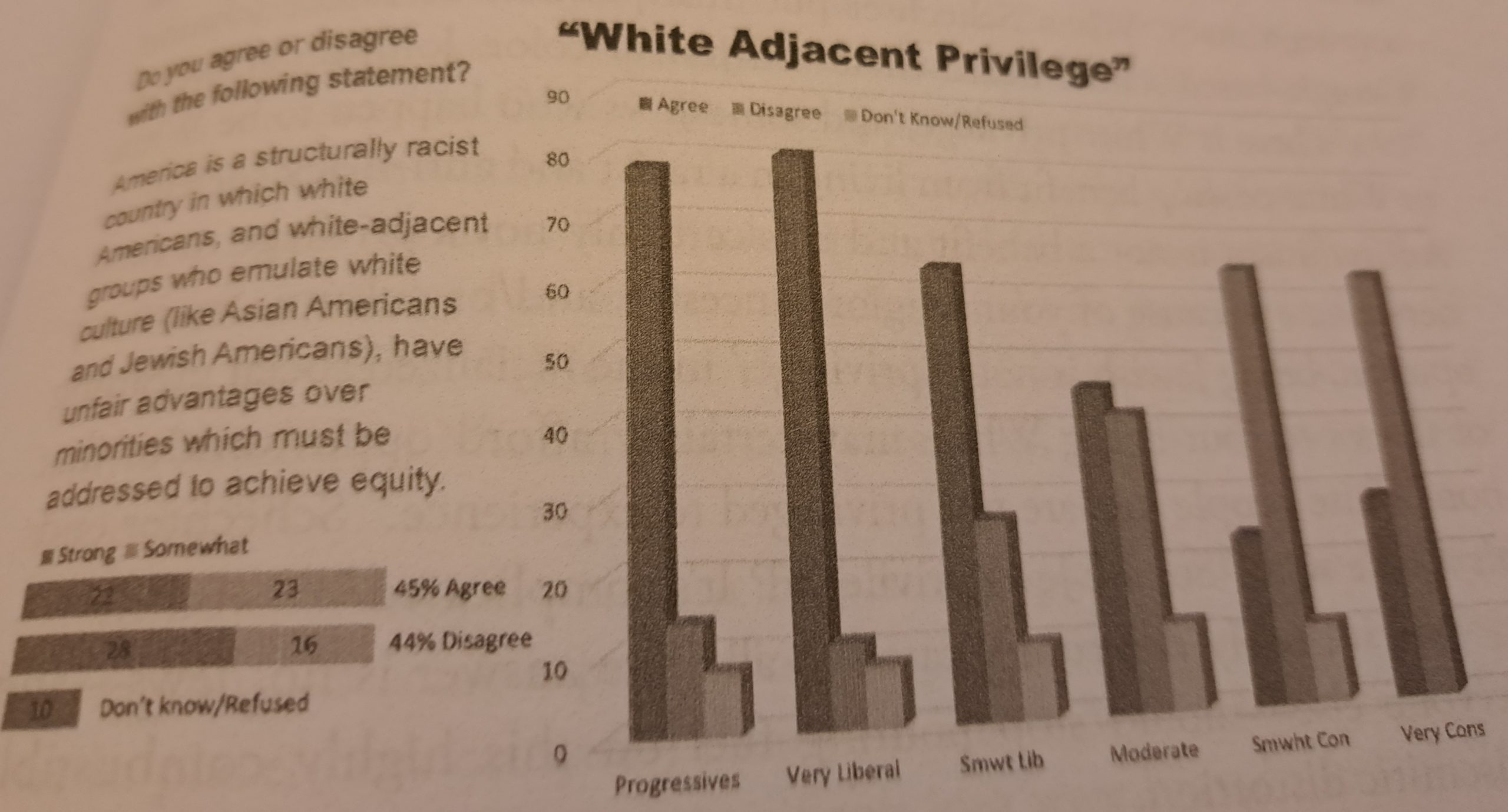 Despite these tough statistics, Bernstein’s book is not even remotely all gloom and doom. It offers well-reasoned rebuttals to the Woke left’s orthodoxy on Jews and race, and ends by providing important and practical advice on how the Jewish community — particularly Jewish institutions — can fight this new scourge of antisemitism operating under the guise of anti-racism.

Bernstein’s book is an immensely important contribution not only to the fight against the new Woke antisemitism, but to the broader battle against the dangerous encroachment of illiberalism penetrating our culture, education, and civic life.