Palestinian Media Watch (PMW) has reported extensively on the Palestinian Authority (PA)/Fatah using children as terrorists and brainwashing them to seek “Martyrdom.” Now, a Palestinian mother of six terrorists, Um Nasser Abu Hmeid, has confirmed that it was Mahmoud Abbas’ Fatah movement that brought her to son to terror when he was still a child:

To the Fatah Movement I say: You took Nasser from me when he was a child, all I ask of you is to return him to me, so that I will be able to pay respects to him and bury him.

Fatah launched Nasser Abu Hmeid’s terror career when he was merely age 11 — the year he was first detained. He was arrested repeatedly for terror -related crimes, and eventually was sentenced to seven life sentences for responsibility for seven murders. He died of cancer last week in an Israeli hospital.

The use of children in conflict as soldiers, or as terrorists, is prohibited and condemned internationally. This candid admission by the mother of the six terrorists that it was Fatah who took her son to terror already “when he was a child,” is an important confirmation of what PMW has been documenting to the international community for several years. 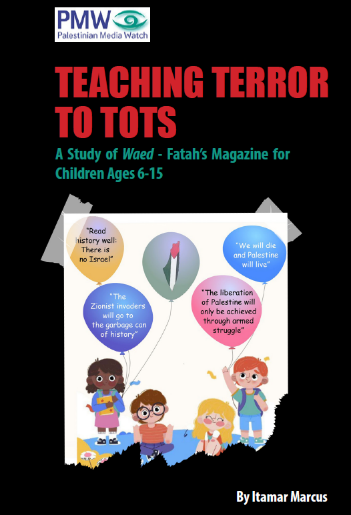 You can read PMW’s recently released report, “Teaching Terror to Tots,” for a precise description of the PA/Fatah’s indoctrination of children to hate Israelis, justify killing them, and to anticipate Israel’s destruction. That’s what the PA/Fatah education system presents as the achievement of justice.

You can also see PMW’s recent report, “How and why the PA kills its own children: Special Report for UN World Children’s Day.”

Confirming his mother’s words that Fatah took him from her “when he was a child,” multiple Palestinian sources report that terrorist Nasser Abu Hmeid, born Oct. 5, 1972, was first arrested at age 11. At the age of 15, in 1987, he was sentenced to two and a half years in prison for his participation in the “Intifada” — the Palestinian terror uprising that started on Dec. 9 1987.

Released in early 1990, he was arrested again on May 28, 1990, and convicted of participating in the murder of Palestinians suspected of working with Israel, and sentenced to life in prison. He was released on June 10, 1994, as part of the implementation of the Israeli-Palestinian peace process. He was re-arrested on October 26, 1994, for new terror offenses and sentenced to five years in prison. He was released on October 15, 1999. On January 1, 2001, soon after the start of the PA-initiated terror war, it was Abu Hmeid who announced the formation of Fatah’s new terror wing, the “Al-Aqsa Martyrs Brigades.” As a leader of the terror wing he was responsible for many terror attacks and eventually was convicted for the murder of seven Israelis.