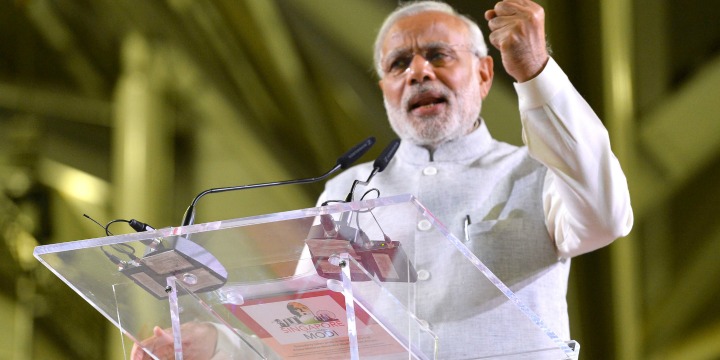 India’s prime minister, Shri Narendra Modi, addresses the gathering at the Indian Community Reception Event at the Singapore Expo in Singapore on November 24, 2015.

American Islamists are using a mosque’s destruction 30 years ago to cast Indian Muslims as living under a fascist threat. They are hoping public ignorance — about the site’s history as a Hindu temple and a court’s ruling setting aside land for a new mosque– will create a false, dangerously misleading perception of a looming Muslim genocide in India.

“In 1992, the world watched with horror as Hindutva extremist political leaders incited street mobs to demolish the Babri Masjid, a 16th century mosque of incalculable historic and cultural value,” Council on American-Islamic Relations (CAIR) Executive Director Nihad Awad said in a press release earlier this month, marking the 30th anniversary of the demolition of a 16th century mosque built in the Hindu holy city of Ayodhya under the rule of Babur, founder of the Mughal dynasty in northern India.

“The destruction of India’s Islamic heritage is part of a campaign of cultural ethnic cleansing by Hindutva extremists and the far-right Modi government that enables them,” Awad added. “The international community must take action to end the Indian government’s war on Islam and Muslims.”

The Indian American Muslim Council (IAMC) called Dec. 6 — the anniversary of the mosque’s demolition — “the darkest day in the history of independent India.”

Perhaps to the IAMC.

“The Emergency,” a 21-month period between 1975 to 1977 marked by a brutal crackdown on civil liberties and stifling of dissent under the then Prime Minister Indira Gandhi, is widely regarded as the “darkest hour” of India’s post-independence history.

Interestingly, the same groups lamenting the loss of a mosque were silent in 2020 when Turkey’s Islamist President Recep Tayyip Erdoğan decided to revert the ancient Christian cathedral of Hagia Sophia into a mosque. A Turkish court ruled that the 1934 decision to turn it into a museum had been illegal.

In contrast to CAIR’s simplistic and bigoted description of the Babri mosque issue, the truth mired in India’s centuries-old troubled history is far more complex.

The mosque was built atop a “grand temple” believed by millions of Hindus to be the birthplace of one of Hinduism’s chief deities, Shri Ram. Hindus and Muslims filed competing claims over the Babri mosque, which lingered in courts for decades.

“Archaeologically there is enough evidence to say that below the controversial Babri mosque, there were temple remains,” K. K. Muhammad, a former regional director of the Archaeological Survey of India (ASI) told the Times of India in 2019. Several artifacts and sculptures found after the mosque’s demolition “clearly [say] the temple has been dedicated to that incarnation of Lord Vishnu (‘Shri Ram’).”

Muhammad was part of an ASI team that carried out an excavation of the site in 1976-77. His conclusions were confirmed in a 2003 ASI report. But the ASI’s findings, according to Muhammad, were contested by India’s “Left historians,” whom he accused of stalling a swift resolution to the dispute.

Muhammad’s assertions have been confirmed by historian Meenakshi Jain, author of two books on the dispute, “Rama and Ayodhya” and “The Battle for Rama: Case of the Temple at Ayodhya.”

Hindu frustration with the slow judicial process and a political establishment unwilling to take sides on the issue galvanized a movement to build a temple on the disputed site. The movement reached an “inflexion point” with the mosque’s 1992 destruction by a group of kar sewaks (Hindu religious volunteers), who attacked the mosque’s domes with crowbars and hammers.

A September 2020 special Central Bureau of Investigation (CBI) court ruling concluded the “Babri demolition was spontaneous, not pre-planned,” and acquitted all 32 individuals accused in the case.

The mosque’s destruction led to violent riots in Mumbai and the 1993 retribution bomb blasts in the city by Islamist terrorists.

In a unanimous November 2019 ruling, a five-judge Supreme Court panel paved the way for building a temple on the disputed site. While calling the 1992 mosque destruction “a serious violation of the rule of law,” the court allotted a five-acre plot to construct a much larger mosque in a “suitable, prominent place in Ayodhya.”

“Justice would not prevail if the court were to overlook the entitlement of Muslims who’ve been deprived of the structure of the mosque through means which should not have been employed,” the court acknowledged.

The Sunni Waqf Board accepted the Supreme Court ruling and plans to build a mosque, an Indo-Islamic research center, a hospital, and a library on the plot allotted to it.

The Babri mosque is not the only mosque alleged to have been built over a Hindu temple. Historians have cited evidence that early Islamist invaders, and later Muslims who established rule in India from the early 12th to mid-18th centuries, destroyed close to 2,000 Hindu temples. Another 200 Hindu temples reportedly were destroyed in Jammu and Kashmir during the 1990s.

“We too denounce the violence that arose in the tearing down of Babri [mosque] and its aftermath,” Suhag Shukla, executive director of the Hindu American Foundation, told the Investigative Project on Terrorism. “Yet it is telling that CAIR provides zero acknowledgment about the archaeological, documentary and testimonial evidence confirming the deeply sacred significance of that site to Hindus for millennia as well as the decades of legal deadlock over its status.”

Islamist terror and radicalization continues to rear its ugly head across India. But American Islamists falsely paint Muslims as victims of one-sided aggression by “Hindutva extremists.” CAIR’s Dec. 6 release is part of that campaign.

American Islamists describe Hindutva as “a shameless ideology, a hateful ideology,” and allude to its supporters as “fascists” and “Nazis.”

“This ideology is very clear,” Indian American Muslim Council (IAMC) Advocacy Director Ajit Sahi said during a May Islamist convention. “It says that India is the land of the Hindus because their forefathers started out in this country and they created the religion of Hinduism thousands of years ago.”

India’s political leadership is “sworn to the Hindutva theology of Hindu nationalism,” Sahi added. “Their one goal, single goal is to convert India into a Hindu country.”

But historian Vikram Sampath, author of a two-part biography on Savarkar, who popularized the term, argues that Hindutva was “a political pushback to political Islam” and a “cultural, national identity marker particularly during the time of the Khilafat movement where people were being led on a very dangerous path of identity politics based on religion.”

Sampath cites the example of Mahatma Gandhi’s support for the Khilafat (“Caliphate”) Movement that sought “to re-establish the despotic Caliphate in Turkey that the British had deposed in World War I.” Gandhi supported the movement in an attempt to forge Hindu-Muslim unity in the freedom struggle against British rule, disregarding the “open calls to violent jihad against kafirs or non-believers” at Khilafat conferences, writes Sampath. A tragic outcome of the movement, according to him, was the 1921 genocide of Hindu Nairs by Moplah Muslims in India’s south-west Malabar coast.

By drawing comparisons with “Nazism” and “fascism” and calling Hindutva “a hateful extremist ideology,” American Islamists only seek to deflect attention from radical Islam and Islamist terrorism, in order to portray India’s religious strife as one-sided Hindu violence.

Abha Shankar is the Investigative Project on Terrorism (IPT) research director, where a version of this article first appeared.