The latest fashion craze in the Palestinian Authority (PA) areas — and among some Israeli Arabs — are shirts and pants with an M-16 rifle printed on them.

The clothing has become popular as a show of support for the murder of Israelis, and emerged immediately after Palestinian terrorist Diya Hamarsheh murdered five in Bnei Brak (near Tel Aviv) last month, and was shown on TV and social media shooting at Israeli victims with his M-16 rifle. 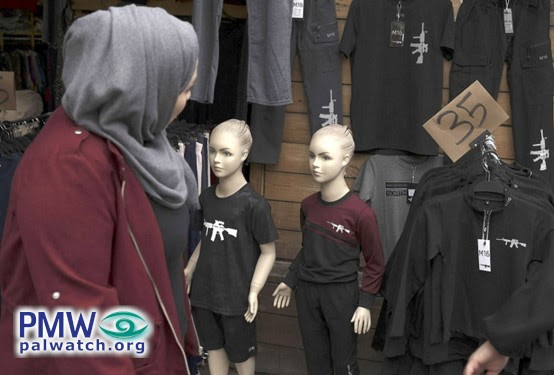 “The demand for this kind of clothing is huge. I think that the reason for this is the situation in Palestine recently, and particularly in Jenin” … Abu Hamza noted that in 10 days he sold approximately 12,000 shirts or pants that also have the print on them, and that he ordered 12,000 additional units due to “the huge demand.”

It is not surprising that these shirts are especially popular in Jenin. Most of the terrorist murderers, including those who killed Israelis using an M-16 rifle, were from the Jenin region.

Palestinian and Israeli academics and politicians say that the attacks that Palestinians recently carried out against Israeli targets, which in some of them M-16 weapons were used, “have become an inspiring symbol for many young Palestinians, which increases their desire to copy those carrying out [the attacks].”

The Israeli news site N12 is reporting that some Israeli Arabs are wearing the same M-16 T-shirts:

Arab workers in well-known [Israeli] supermarkets, students, and young children — were seen wearing the shirt on which the weapon is printed.

Israelis are naturally outraged at this open support for terror by Palestinians and their leaders, and by some Israeli Arabs.

Itamar Marcus, Founder and Director of Palestinian Media Watch (PMW), is one of the foremost authorities on Palestinian ideology and policy. A version of this article was originally published by PMW.